What Buffs Can the Industry’s Smallest ToF Bring to Smart Home Appliances?

The intelligentization of home appliances should automatically respond appropriately according to the surrounding environment without human intervention. This automatic perception of the surrounding environment inevitably involves the participation of sensors. The 1D time-of-flight (ToF) sensor launched in the past two years has gradually been recognized and widely used by major smart home manufacturers.

The commonly used ranging solutions ON the market mainly include infrared pair tubes, proximity sensors, 1D time-of-flight sensors and triangular ranging sensors. The principles, advantages and disadvantages are as follows: 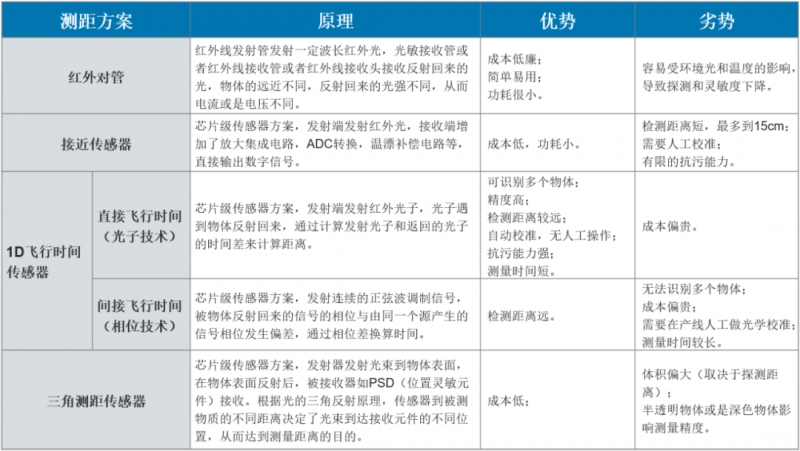 Infrared-to-tube and infrared proximity sensor ranging solutions are more suitable for smart home application scenarios such as bathrooms with automatic flips and automatic toilets, automatic faucets, etc., because such scenarios do not require high accuracy; but high-quality bathroom and automatic The faucet is also switching to a 1D time-of-flight sensor scheme.

Next, the principle of 1D direct time-of-flight sensor and the application of smart TV as an example are introduced in detail.

Take the newly launched TMF8801 from ams, which can detect a distance of 2cm~2.5m, as an example. Its internal structure is as follows:

The IR laser transmitter (using a VCSEL) emits photons through the optical components, and at the same time sends a start signal to the time-to-digital converter (TDC). SPAD) and cause SPAD to avalanche, thus giving TDC a stop signal. TDC calculates the time between the start and stop signals to know the round-trip flight time of photons, and the speed of light is known, and the distance between the object and the sensor can be calculated. Distance, is a true time-of-flight measurement.

Advantages of the TMF8801 Time-of-Flight Sensor

#1 Histogram output
TMF8801 can directly output histogram data. The histogram is an accurate graphic representation of the data distribution. By continuously collecting the signals of infrared light reflected by the object for processing, it reflects the distribution of TDC data and facilitates the accurate calculation of the distance algorithm.

Figure 3: Histogram of data reflected back from cover glass and objects 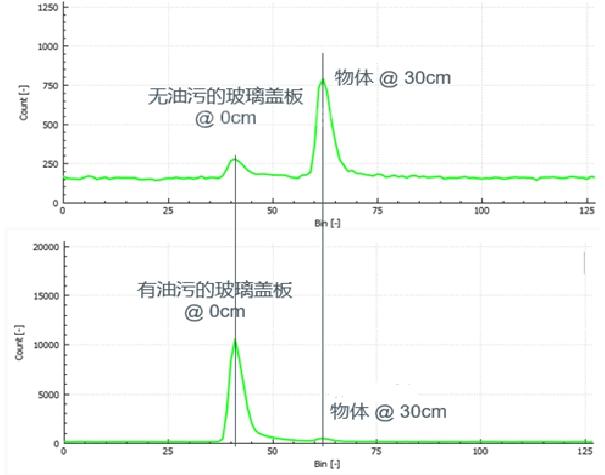 In addition, the wavelength of the emitted infrared light source is 940nm, and the infrared light of 940nm has less components in the ambient light, so the interference will be relatively small.

#4 Auto Calibration
There are two kinds of calibration, one is time calibration. TMF8801 mainly uses the time of infrared laser shooting and reflected back to calculate the distance, so the precision of the built-in clock is very high. In order to avoid clock deviation, TMF8801 will automatically use the system clock as the Calibration, real-time calibration. The other is a one-time optical calibration of the production line, which requires no manual intervention. It only needs to ensure that there is no obstruction within 40cm in a dark or no-light environment, and the software can trigger the calibration.

In addition, the TMF8801 is limited by the illumination angle, and can put multiple 1D time-of-flight sensors to expand the detection angle. 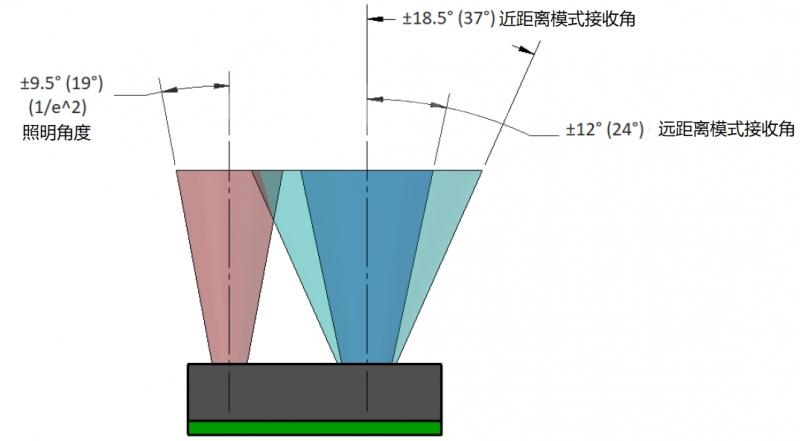 Figure 5: The receiving angle and illumination angle of the TMF8801 chip

As we all know, the distance of watching TV is related to eye health: the closer you are to the TV, the stronger the contraction of the rectus muscle in the eye, and the easier it is to cause visual fatigue, especially because children lack self-control, they will unconsciously approach the TV . If the TV is equipped with a human body approach scheme, once it detects that the human body enters a certain range, it will automatically dim or turn off the Display backlight and issue a warning to remind the user to stay away from the TV and protect their eyesight.

Equipped with multiple 1D time-of-flight sensors on a smart TV, it can detect the distance of moving objects that are approaching from multiple angles and respond accordingly. 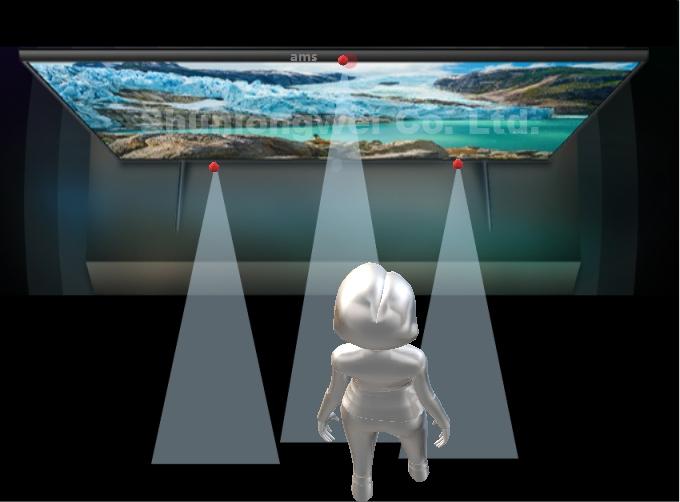 In addition to human proximity detection, the 1D time-of-flight sensor can also be used with the smart TV’s camera to achieve autofocus. At present, there are two mainstream camera focusing schemes. One is the focusing scheme based on CCD semiconductor imaging devices, which uses the principle of light reflection from objects. The light reflected from the object is received by the sensor CCD on the camera, and processed by the computer to drive the electric focusing. device to focus. As the pixels of the camera get higher and higher, the focusing time will be longer and longer. The other is a ranging focusing solution. Using a 1D time-of-flight sensor, the focusing distance can be directly given, which improves the focusing speed. Compared with other focusing solutions, the speed is faster and the cost is lower.

The development of smart homes has expanded the application market of sensors, and 1D time-of-flight ranging sensors, as a member of the sensor family, have a wider range of application scenarios and can be used in many daily home appliances to further upgrade the smart home industry and help home appliances. Intelligent.