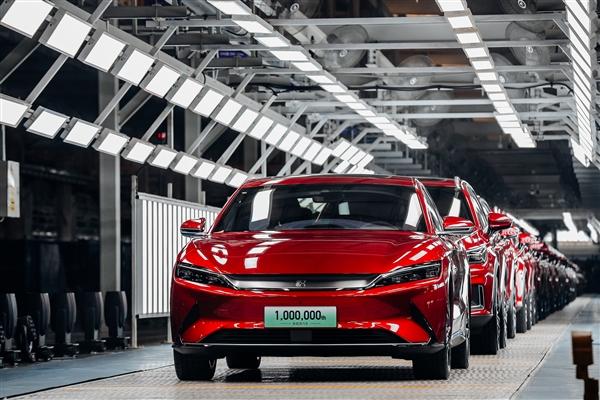 Moreover, as BYD’s electric buses “conquer cities” in the European market, BYD’s high-performance, high-standard, and high-cost models are warmly welcomed by foreign users, and they have a strong sense of identity and trust in the BYD brand.

Witnessed by the commercial counselor of the Royal Norwegian Embassy in China, Anjof, BYD announced that it plans to deliver 1,500 Tang EVs to Norway within the year, and the first 100 units will be rolled off the production line, which will be shipped by the end of the month and delivered to local consumers in the third quarter. BYD’s internationalization strategy continued to accelerate.

As early as 2008, the first new energy vehicle sold by BYD was the BYD F3DM, which was one of the earliest mass-produced plug-in hybrid models in the world. starting point.

In terms of models, BYD has launched two types of plug-in hybrid models and pure electric models in the “e series” and even the “Dynasty series”. Enter different markets to meet different user needs.

It can be said that BYD’s 1 million vehicles have a high gold content. This is the first time that a Chinese brand has achieved this achievement. BYD’s new energy strategy that has persisted for many years has finally paid off.

At the ceremony, BYD invited 10 representatives of new energy vehicle owners, including the 100,000th, 200,000th… Behind this ceremony is the user thinking reflected in BYD’s user operations.

In addition, BYD plans to launch an independent high-end new energy brand in 2022 and build an independent dealer network. According to the plan, the models of the new high-end brand will be built on the EV 2.0 platform, and the first model is planned to be launched in 2023. During the Shanghai Auto Show, BYD released the e-platform 3.0. The official said that the platform can achieve zero-to-zero acceleration of electric vehicles as fast as 2.9 seconds and a cruising range of up to 1,000 kilometers.

In 2004, BYD’s pure electric concept car ET was unveiled at the Beijing Auto Show, which was the first time a new energy vehicle appeared at an international auto show held in China; in 2008, the world’s first mass-produced plug-in hybrid electric new energy vehicle, the F3DM, was officially launched .

In 2020, the product performance of the “12 best in the world, 9 best in China”, Han was officially launched and brought a subversive influence.

In 2021, BYD released the “DM Super Hybrid Technology”. The DM-i model brings a revolutionary fuel consumption of 3.8L per 100 kilometers and an acceleration of 100 kilometers per 7 seconds, completely subverting the current fuel vehicle market models. Today, the cumulative order volume of DM-i models has exceeded 100,000 units. This year, BYD’s sales of new energy models will rise to a new height, which will accelerate the realization of BYD’s second goal of 1 million units.

Wang Chuanfu, Chairman and President of BYD Co., Ltd., said: “BYD shoulders the responsibility and mission of the upward development of China’s new energy vehicle brand. From 0 to 1 million vehicles, BYD has led the reform of the global auto industry and handed over an answer; The new energy vehicle industry has grown from scratch and grown from small to large, realizing the turbulent journey from a traditional car country to a new energy vehicle power.”