Tektronix, Inc. has expanded its family of 5 Series mixed-signal oscilloscopes (MSO), first introduced in 2017, with the launch of its 5 Series B MSO with new functionality, including added support for power integrity testing and enhancements for debug and validation. Key new features include an auxiliary trigger input, a 250-GB removable solid-state drive, and 100-MHz maximum frequency.

The new 5 Series B MSO offers several advances including a new auxiliary trigger input that enables users to synchronize the oscilloscope to an external signal without consuming any of the 4, 6, or 8 full-capability input channels. Tektronix also increased the maximum frequency output from 50 MHz to 100 MHz for the optional, built-in arbitrary/function generator, which enables higher frequency stimulus for measurements such as Bode plots and impedance measurements. 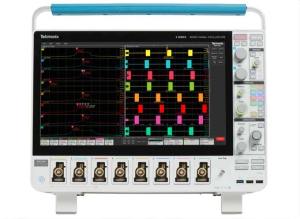 For greater collaboration, the 5 Series B MSO offers new tools for offline analysis and cloud data storage. The TekScope PC software enables analysis of the oscilloscope waveform data anywhere. It includes built-in controls that allow users to save data to the TekDrive cloud storage.

Other new features include a faster processor, a brighter display, and a solid-state drive system that ensures all user data is stored on a 250-GB removable drive. In addition, a new history mode enables users to capture and easily review thousands of triggered events, said Tektronix.

Both the original 5 Series and the new 5 Series B MSO ship with low-loading passive probes with bandwidth up to 1 GHz. The scopes support a variety of probes, including power rail and optically isolated probes such as the IsoVu Isolated Probe to eliminate common-mode interference using optical isolation.

Since the launch of the original 5 Series, the company has released 16 firmware updates. Available now, U.S. price listing for the Series B MSO starts at $16,000 MSRP.