Startup Somalytics Inc., spun out of CoMotion at the University of Washington, in November, will demonstrate two new products based ON its miniature carbon-nanotube paper composite (CPC) capacitive sensors at CES 2022. Claimed as the first-of-its-kind miniature paper carbon nanotube capacitive sensors, these devices are said to be highly sensitive to human presence, opening up a new generation of touchless technology and applications for gesture-based digital interfaces, wellness monitoring, and safety.

The ultra-flexible capacitive sensors, built using a substrate filled with carbon nanotubes, was developed at the University of Washington in the laboratory of Jae-Hyun Chung, associate professor of Mechanical Engineering and Somalytics’ co-founder, and the laboratory of assistant professor of Environmental and Forest Sciences Anthony Dichiara. 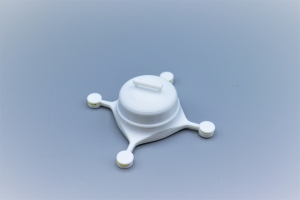 Compared to existing capacitive sensors, the miniature CPC components, fabricated with carbon nanotube paper, with a <1-mm diameter are reportedly 100 times smaller and 10 times faster, with a greater range for sensing proximity and pressure. Offering high sensitivity to human tissue, the sensors detect human presence at up to 20 centimeters and work with any skin tone or eye shape.

The range depends on the desired use but it is typically 20 cm and can be up to 30 cm with appropriate shielding, said Barbara Barclay, CEO of Somalytics.

Existing capacitive sensors have the ability to sense at great distances, but they’re proportionately larger, she said. “It might be a minimum of a couple of inches in order to detect something that is 10 or 20 centimeters away whereas this would be a single sensor that is 1-mm wide and detects more than 20 cm away.”

The sensing technology also recognizes 3D gestures without the need for any hand device, and are said to be faster and better than infrared. It offers speeds up to 1,000 Hz and low latency of <3 ms. The technology can be used in a range of proximity-sensing body, eye, and gesture monitoring products applications, including eye tracking wearables, human machine interfaces (HMI), and safety products.

Due to the miniature size of the sensors, ranging from 1-mm wide × 4-mm long up to 5-mm wide × 4-mm long and under 1-mm thick and because the sensors are extremely thin like paper, they can be embedded in almost anything including phones, play stations, and virtual reality (VR) goggles, said Barclay. “As an example,  you could deploy them in a phone at the four corners to enhance the 3D proximity sensing.”

Barclay believes the sensing technology has the potential to replace any kind of sensor but in a smaller size and at a lower cost. In the area of proximity sensing and industrial environments, it typically can replace the use of three or four sensors due to its higher sensitivity on average, she said.

What really sets these sensors apart from other sensors is their sensitivity to human presence at great distances, she added.  “There is a lot of potential with that size combined with that distance.”

In addition, it is the smallest capacitive sensor in the world and it is easy to mass produce in extremely large quantities at a low cost, which will open up a lot of new areas that typically wouldn’t be explored today because it is just too expensive, Barclay said.

The capacitance sensor also can detect the movement of the eye without using a camera, she said. “It is able to track the eye movement, for example, in VR or in eye-tracking glasses at unprecedented speeds because it is so fast and has such low latency.”

For the last 20 years people have been tracking the eye movement in eye-tracking glasses using cameras that take rapid images of the eyes, process those images, and then determine the eyes are looking at a specific spot, Barclay said.

“Somalytics’ sensors will open an entire new era for wearable eye tracking because the sensors are not camera based and there is no illumination of the eye required,” she said. “The processing speed is under 3 ms, and the sampling rate is 10 times faster than best-in-class existing technologies. With Somalytics’ sensors, eye tracking will evolve to accomplish the ‘real feel’ and ‘real-time eye to eye’ experience for which augmented and virtual reality users have long waited.”

Mass production of the new capacitive sensors is expected to start in 2022 through its partnership agreement with the University of Washington that gives the company access to two labs. Through the collaboration with the two labs, the company will finalize the manufacturing process for the paper itself and then automate the manufacturing process for the sensors.

“We should be able to manufacture by March about 1,000 sensors per month and by the end of 2022 in the multiple millions in a U.S. manufacturing facility ourselves,” Barclay said. A development kit is planned for early April 2022.

“The OEM products will be used in demos; loaned to people for demonstration, testing, and validation, and will be launched later this year [2022] commercially with more advanced features,” Barclay said.

She expects at least one product and likely two to be commercially available in 2022. 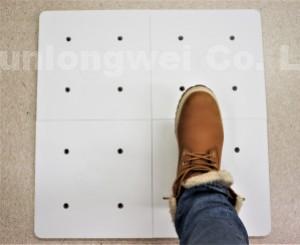 SomaControl is a 3D gesture monitor that enables users to interact with and control a digital device using hand movements with no contact. It can be used in the home or integrated into gaming devices for a more immersive experience.

SomaSense is described as a flexible 3D sensing floor mat that observes, monitors, and reports on human wellness factors, including presence, gait, and foot pressure. Target health and wellness applications include assisting individuals with balance, movement, and other challenges.

Somalytics is exhibiting its products at booth #513 at Unveiled Las Vegas on Jan. 3 and in the  CES Central Hall booth #15879 at the Las Vegas Convention Center, Jan. 5-8.