The patented FollowKnee system integrates a deformation sensor, a pH sensor, a temperature sensor, and an accelerometer in a titanium tibial baseplate. The deformation sensor and accelerometer ensure a more accurate implant fitting by guiding the surgeon during the operation, said the researcher. They also can trigger an alert if mechanical problems are detected such as loosening of the implant. Those two devices also enhance rehabilitation by helping physiotherapists adapt therapy for knee-implant recipients. 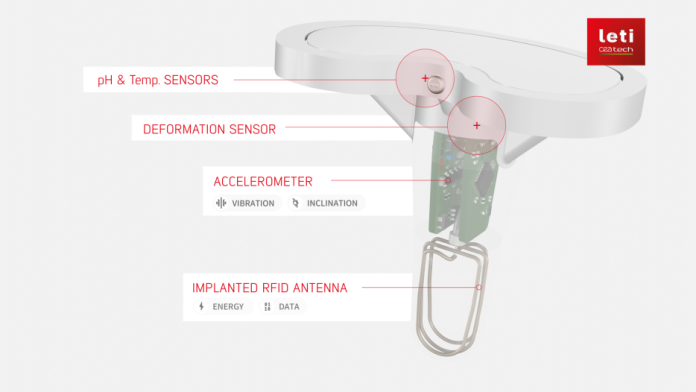 The FollowKnee system integrates a deformation, pH, and temperature sensors, as well as an accelerometer in a titanium tibial baseplate. Click for a larger image. (Source: CEA-Leti)

“The deformation sensor consists of several strain gauges placed very specifically and integrated into a part specially created inside the implant by 3D printing; it measures the forces applied by the femoral part ON the tibial base,” the research institute told Electronic Products.

The system uses a commercial accelerometer that is integrated directly into the on-board electronic card. It provides access to the flexion angle of the patient’s leg as well as prosthesis vibration information.

“The deformation, bending angle, and vibration measurements will be used both during placement so that the surgeon can check the correct positioning of the implant, during rehabilitation and then throughout the life of the implant in order to detect and treat, if possible, in time possible mechanical problems (e.g.: loosening of the prosthesis),” said the research institute.

Claimed as the world’s first application connecting a pH sensor with living tissue, the system’s pH and temperature sensors detect infection early. It is also considered the first low-power deformation sensor in a biocompatible system with highly compact electronics powered via inductive coupling.

“The pH sensor is specifically developed by CEA-Leti,” said the research institute. “It is an extremely miniaturized electrochemical sensor that benefits from a surface treatment allowing it to be biocompatible and functional several months after implantation.”

In addition, the pH sensor is sterilizable and to the researcher’s knowledge the only pH sensor integrated into an implant.

The commercial temperature sensor also is biocompatible and sterilizable even though it is not in direct contact with tissue.

“The combination of the two pH and temperature measurements will be used to detect an infection as early as possible so that it can be treated quickly,” said the researcher.

CEA-Leti will demonstrate the sensors, electronics, and a reader integrated in a clear acrylic column representing a leg fitted with a complete knee prosthesis at CES, Jan. 5-8, Las Vegas, at Eureka Park booth 60655. A tablet will display the data collected by the sensors. 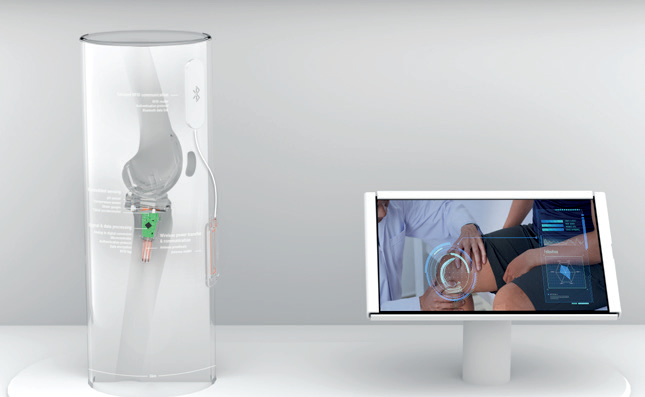 The FollowKnee project is financed by the French ANR program with 13 partners. The technology is expected to be adapted for hip and shoulder replacements. The researchers expect a first clinical study in 2024.