A medieval walled city reinvented — smart cities must be independent or at least able to counter threats by becoming independent when necessary. Reasons include increasingly violent weather, grid neglect, and cyberattacks making national electricity grids less trustworthy. In addition to smart independence, the cities must also have independent or, ideally, localized food and water sources.

The role of 5G in smart cities

Consider 5G, which was promised as essential and available everywhere. Currently, the version at gigahertz levels is rolling out in many major countries, but 10× faster speeds are becoming available only in parts of cities because of cost and limited interest. That augurs badly for 6G, which may similarly start at one frequency and develop to another 10× faster — say, 1 terahertz (far infrared) eventually. It is promised for everywhere, but the mere hundreds of meters of range of advanced 5G is challenging, and 6G at a mere 100-meter range is even more challenging.

One of the bottlenecks is that flexible manufacturing systems are still not prevalent. Other challenges include the lack of feature support in device components and performance validation. Regardless, 5G development is driving industrial demand toward wireless networks.

Another example is 5G for smart cities. With LTE-M and NB-IoT standards embedded in 5G operations and 3GPP Release 17 in 2022 better enabling low-power and IoT applications , we can expect to see more advantages of 5G in various smart-city applications, such as smart utilities and metering, traffic management, public transit, electric vehicles, autonomous vehicles (AVs), and smart buildings. 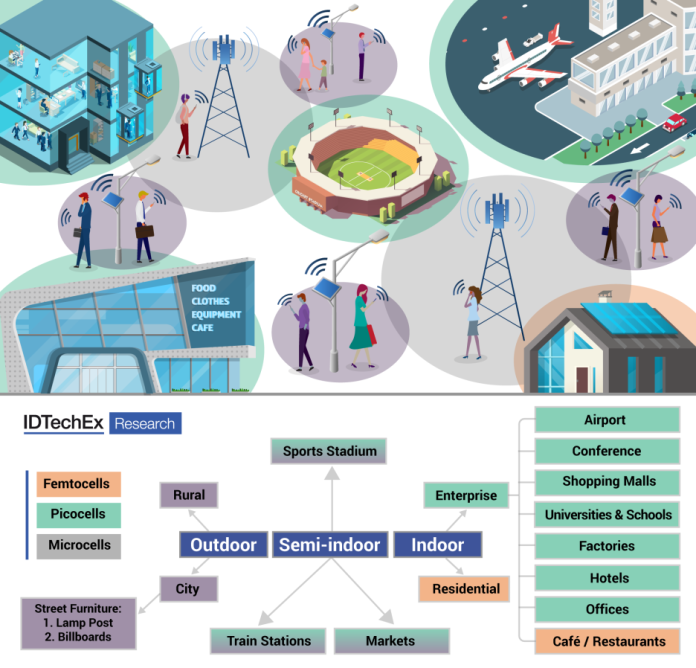 Cost is another issue. For example, the steel gantry over a road can cost more than the traffic monitors and signage it supports. Similarly, reprogrammable intelligent surfaces vital for 6G must be deployed across city buildings and indoor walls. Installation may be most of the cost for these as well.

However, IDTechEx believes that the benefits of 5G/6G communications to health care, education, security, safety, and entertainment are huge, so it will win in the end. Indeed, 6G can be deployed widely by combining free-space optics, fiber optics, and metasurfaces that incorporate metamaterials.

Metamaterials will be one key enabler for smart cities that requires sensors everywhere. These smart materials use repeating patterns to achieve functions not found in nature, such as solar panels that follow the sun without moving parts or sensors that are better, more affordable, and fit in more awkward places. Some are just patterned plastic film.

Then it may even reverse the unmanageable trend to more of us living in cities and whole nations being ON the move due to rising sea levels. 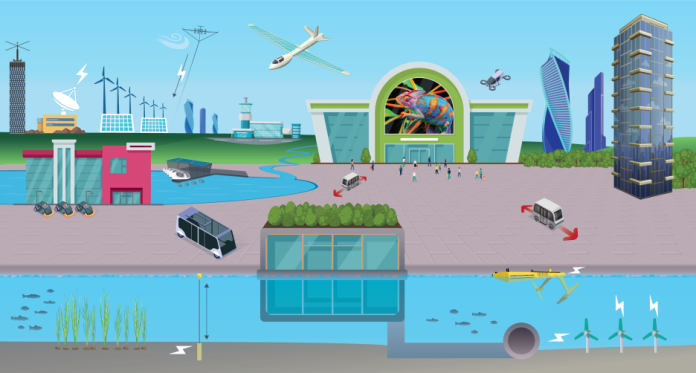 The most desired level of automation concerns AVs. Yes, city vehicles will be battery-electric, autonomous, and, more notably, as multi-purpose robot shuttles. This can result in almost no congestion, pollution, or accidents. However, they will not be widely deployed with true “Level 5” autonomy until at least 2030. Cost, acceptability, reliability, and other issues such as necessary legislation and insurance are the issues holding this back.

Most proponents currently use LiDAR, which requires constant remapping of the frequent changes to traffic rules and blockages. A further delay will be caused by market leaders not being able to build battery-electric–vehicle factories fast enough and by the possibility of legacy vehicle makers with $100 billion levels of debt going bankrupt.

Connectivity cannot be discussed without further commenting on 6G for vehicles. Why have the telecommunications operators stopped talking about 6G communications available in 2030 being essential for AVs? It was a major justification for the investment. Tesla has the answer, arguing that road vehicles need to drive anywhere, and for safety reasons, they should not rely on telecom infrastructure functioning correctly and no cyberattacks.

“Greater connectivity to all the world’s vehicles — land, water, and air — is very desirable as long as it is not mission-critical,” said Raghu Das, CEO of IDTechEx. “Autonomy land, water, and air need to be independent and preferably not rely on mapping, which is why Tesla does not use LiDAR. Contentiously, Tesla even intends to work without radar, and time will tell if this is successful. A second benefit of all this simplification is reduced cost as long as the huge processors can be made affordable. That is a maybe.”

Certainly, LiDAR and radar systems are a major part of the cost of autonomy in vehicles today.

These challenges are similar for the proposed battery-electric air taxis. IDTechEx calculates that the drone-like ones in cities pose great problems for air traffic control and financial viability, but the versions with wings and vertical takeoff and landing are safer and have a chance of going further at a lower cost.

Robotaxis are simply autonomous cars that, when acceptable and viable, will replace private cars banned in cities to reduce congestion, pollution, and parking. That is an incremental change, but much more significant is a disruptive change from smart shuttles. These are symmetrical — so no U-turns — meaning they may be allowed up paths, across plazas, and into shopping malls, with their wide sliding doors rapidly accepting people on wheelchairs.

The most popular designs allow up to 20–25 people because they have standing room. They superbly meet the demand of city authorities for inclusiveness and for access even where traditional buses are not viable. With no driver in the way, the all-around windows will prevent claustrophobia and delight tourists.

These smart-shuttle designs, for example, can switch yellow for the school bus run and double as package, delivery, fast food, and utility vehicles and more. It will be possible for some of those services to be free of charge — inclusiveness again. The Toyota e-palette robot shuttles in its Woven City, the first smart city in Japan now under erection, meet these objectives. In favor of this design, tiny four-seaters will fall by the wayside.

Incidentally, Toyota and others are exploring a hydrogen economy for their smart cities, and simply ensuring this is safe is a massive challenge for sensors and information technology. IDTechEx believes that a purely electric smart city is the future, mainly because of efficiency and ultra-low–cost solar everywhere. You can already buy solar facades, fences, driveways, road furniture, cars, boats, and roofing, but a major gap in the market is energy storage and information technology and sensors to orchestrate such distributed energy sources.

Sensors are a fundamental component of automated systems, which need to detect changing parameters and respond accordingly — put another way, machine-learning algorithms need incoming data to learn from and react to.  As such, smart cities will require a vast array of widely distributed wirelessly connected sensors, likely utilizing 6G. Examples include gas sensors for air-quality monitoring, chemical and biological sensors to monitor water quality, cameras and LiDAR to monitor pedestrian and traffic flow, and vibration sensors to enable predictive maintenance of tunnels and bridges.

Will vehicles fail when connectivity fails? We hope not, but that brings us back to what 6G communications is all about. The promise of 6G communications revolves around 1-cm positioning accuracy, amazing data transfer amount and speed, and sensors that deliver more than just a better smartphone. It is now building to maximum overpromising, but the frequency will remain undecided through 2022, so caution is needed.