Robotic printed-circuit board (PCB) assembly is not a part of all factories yet, but it’s becoming more common. That is especially the case for companies that want to stay competitive and keep up with increasing client demands. Here are six benefits that decision-makers can expect after implementing robotic solutions in their PCB assembly lines.

Many company decision-makers opt to pursue electronic automation because of a desire to optimize processes. That was the case for an electronic automotive component manufacturer in Tianjin, China, that wanted a robotic solution that would both apply conformal coating to PCBs and utilize automated optical inspection to check the results.

Company leaders chose a solution that controlled the position of the PCB during the dispensing process for the coating, which was applied to both the top and bottom of the component. The inspection began after the bake-out phase, and the automated system triggered an alarm if the optical inspection technology detected any flaws.

The system provides a user-friendly and editable interface that allows users to customize the robot’s operation for their needs. They can also achieve faster changeovers and reduce the labor force needed for secondary inspections done by humans for quality assurance. 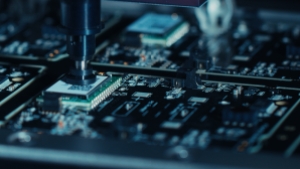 Using robotics in certain parts of the PCB assembly process can reduce process bottlenecks and help humans spend more time ON the tasks they do best. Often, the goal is not to have robots handle every part of the PCB assembly but to determine which processes they may do better than people can.

For example, researchers wrote an academic paper on how human-robot collaboration could optimize PCB production scheduling. They examined how people and machines work together to make a single PCB or complete several simultaneously in a sequenced approach.

Many industrial robots used in PCB production feature articulated arms that allow for an extensive range of motion. Aspects like gravity and changes in load can affect tool position accuracy. Even so, many offer accuracy on the order of millimeters. Additionally, manufacturers can order numerous attachments for robotic arms that allow the machine to complete various tasks.

At least one robotic arm on the market has specific heads for high-frequency and laser soldering. The ability to switch between robotic arm heads for particular tasks helps purchasers get their money’s worth on these tech investments. When one company transitioned to robots for some soldering duties, representatives said overall error rates went down because machine operators were better able to spot issues and fix their root causes earlier.

Company leaders often become interested in robotic PCB assembly after setting goals that target inefficient or ineffective processes. That was the case for a PCB manufacturer that wanted to optimize its current inspection process, which took one to three minutes for humans to complete.

The business implemented a robotic setup that was about as fast as people in terms of the inspection rate. However, it surpassed humans in its reliability and objectivity.

Another major benefit was that an assembly line operator could remotely supervise the inspection process. This advantage allowed the company to add another shift without increasing the number of people on-site in the facility.

Some manufacturing facilities are also using robotic PCB assembly options in the earliest stages of production, such as moving PCB components from storage towers onto assembly lines. Robots can load and unload the towers, then put the pieces into the correct areas, preparing them for later steps.

This approach makes the overall material handling process more streamlined. It also reduces the likelihood of errors that could cause confusion and manufacturing bottlenecks.

Letting robots handle PCBs can also decrease instances of electrostatic discharge (ESD) that could damage the components. No robotic system will eliminate the risk, but bringing automation into the process could allow people to exert more control over ESD sources.

Since PCBs contain precious metals, there have been ongoing efforts to extract usable resources from discarded or defective electronic components. However, statistics from the United Nations indicated only 17.4% of electronic waste in 2019 got collected and reused. Electronic equipment deemed unretrievable gets dumped in landfills or burned. In 2019, the amount of materials discarded instead of reused was valued at about $57 billion.

However, robots might improve the situation. A research project demonstrated a robotic solution for desoldering and removing PCB components for recycling. The robot used in those tests included special attachments to help it work on the PCB, plus image-recognition software that located the parts of the PCB containing recyclable materials. This example shows the possibilities that robots could offer for sourcing materials that later get used when assembling new circuit boards.

In another case, researchers applied robots to PCB remanufacturing by tasking the machines with ball-grid–array reballing and the positioning of surface-mount technology. Upcycling is already becoming more common in the electronics industry. One company that repurposed those products accepted more than 3.1 million products in one year. It could take a while for it to become commonplace at PCB assembly facilities, but robots will likely play a role in its increasing adoption.

How will electronic automation help you?

These are some of the ways companies depend on robotic PCB assembly to achieve numerous benefits. These applications are not the only possibilities, however. If you’re thinking about using robots in a PCB manufacturing plant, spend time thinking about which parts of your process are most prone to errors or slowdowns. Those could be some of the most advantageous areas to automate, either partially or fully.

Emily Newton is a technical writer and the editor-in-chief of Revolutionized. She enjoys researching and writing about how technology is changing the industrial sector.