The LoRa Edge LR110 chipset for the sub-GHz band, introduced in 2020, featured Wi-Fi and GNSS sniffing capabilities with LoRa Cloud geolocation. The new LR1120 extends the geolocation IoT platform into global transportation and mass-scale asset management with multi-band capabilities for sub-GHz (150 MHz to 960 MHz), 2.4-GHz ISM bands, and licensed S-band for satellites. This is combined with multi-technology geolocation with GNSS for outdoor and Wi-Fi for indoor, as well as for areas where satellite coverage is poor. 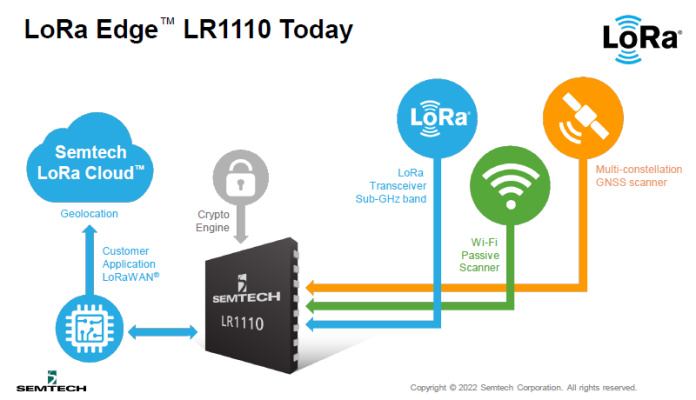 According to Sree Durbha, director of product line management for Semtech’s LoRa Edge and LoRa Cloud products, satellite communication for IoT provides global coverage that is currently not possible with sub-GHz LoRa. Operating LoRa in the satellite communication S-band, the licensed portion of the ISM from 1.9 GHz to 2.2 GHz, enables devices to operate all across the globe, he said.

“You can communicate from a satellite to an Earth or ground station, which can then Relay the communication to an end node that contains our devices, and the key benefit is global coverage,” said Durbha. “So there is no need to program a device to operate in a particular frequency, which is the case today with the sub-GHz LoRa.

“You’re able to track goods from the point of origin coming out of a factory to the distributor and to the mode of transportation,” he added. “It can be land, air, or sea and then through customs, reaching the warehouse, and then local transportation from the warehouse to the end customer. Continuous tracking is now possible. 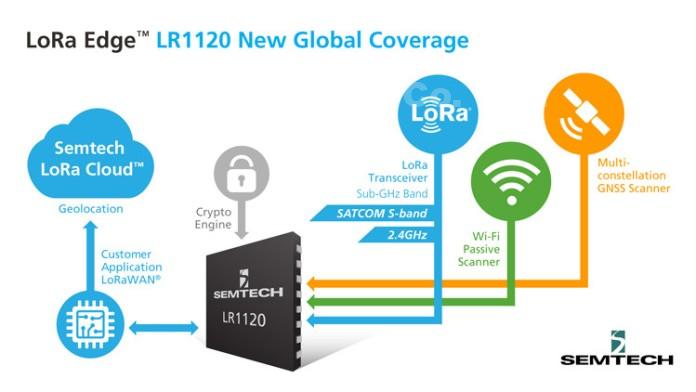 “There are also clear cost advantages as well to having one device that can be shipped all around the globe,” he said.

The new solution can help with supply chain problems experienced throughout the pandemic by tracking goods. “With satellite communications or even 2.4-GHz LoRa, companies that operate ocean liners or logistics companies can track their goods throughout the route from ports in Asia to the U.S. or Europe, for example,” he said.

The LR1120 also showcases the same security features as the LR110 chipset, including a hardware crypto engine, supporting AES-128 encryption-/decryption-based algorithms. It also delivers the same level of low power consumption as the LR110 to enable ultra-low–power trackers.

Standby power is measured in the sub-1-µA range, so it allows for battery-operated trackers and other devices whose life is measured in years versus weeks to months.

As examples, Digital Matter developed two geolocation products based ON the LR1110: One product used a LoRaWAN backhaul for communications in the sub-GHz band and the other one used a cellular backhaul. With the LoRaWAN version, the company can deliver a 12-year battery life on two AAA batteries and a 10-year battery life with three AAA batteries on the cellular version of the tracker. This translates into a 66% advantage in terms of power consumption with the tracker using the LoRaWAN backhaul.

The LR1120 also improves interoperability across multiple regulatory regions. Because each country in the European Union is covered by different networks, fleet management companies have to pay these network providers for coverage in each of these regions.

“With satellite communication or with the 2.4-GHz LoRa communication, it is a single product that doesn’t have to get certified for different networks or different frequencies of operation,” said Durbha. “It is likely going to be one network provider, and with 2.4 GHz, it is free; it is basically the same band that Wi-Fi and BLE use today.

“With 2.4-GHz, it is possible to send packets at a higher data rate for applications that require higher throughput or higher data content,” he said.

The LoRa Edge LR1120 also opens up the potential to use satellite connectivity in new use cases such as infrastructure monitoring, agriculture, and environmental monitoring in remote areas.

“Given the cost to deploy these trackers and what customers see as valuable, it makes sense to attach these trackers to bigger objects, like containers or high-value assets, but there are also other use cases like food chain monitoring,” said Durbha. “In these cases, you’re not actually tracking the device; you are monitoring the temperature. There are other sensors like temperature or humidity sensors on the device attached to a stationary refrigerator or in the back of a grocery store, for example, monitoring the temperature of the meats and produce in the fridge.”

This also expands the ecosystem with new players taking advantage of these capabilities.

“They’re looking to add support for 2.4-GHz LoRa and/or the satellite band using LoRa protocols for LR-FHSS [long-range frequency-hopping spread-spectrum],” said Durbha. “With sub-GHz, there were limitations in terms of cost and regulatory certification. Now they have the ecosystem support to go ahead and support multiple use cases over land, over the seas, and also for stationary use cases in remote areas such as in the middle of the desert or offshore oil drilling. That’s all possible now with satellite communications.”