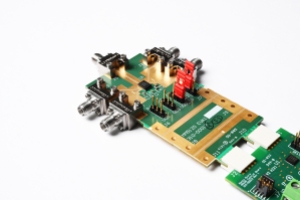 The SP4T switch enables RF operation at high power levels over a wide temperature range from -40°C to 85°C. It also is said to deliver superior linearity from DC to 6 GHz. The IP3 of 95 dBm enables significant reductions in distortion, which is a key metric for demanding RF applications such as 5G beam-steering antennas, military radios, or radar systems, said Jonathan Leitner, senior product marketing manager, at Menlo Micro.

At the heart of the new module is the existing MM5130. But unlike the MM5130, the new RF MEMS switch includes a CMOS charge pump driver ASIC – charge pump with driver circuitry –  with other peripheral passive components, said Leitner.

This is a single-pole/four-throw switch, so the Voltage has to be routed to each of those four “gate lines,” and that requires either a dedicated multiplexer IC or a mosfet driver circuit, and by integrating the charge pump and driver circuitry, the MM5140 saves in terms of both bill-of-materials (BOM) and board area, he said.

The MM5130 is still a great design, but it works at a higher frequency, Leitner said. “If a customer needs to be at the higher microwave band, the MM5130 is really the way to go. The MM5140 is designed to meet a sub-6 GHz type of application.”

Menlo Micro also changed the package. The MM5140 is housed in a LGA instead of a WLCSP “The pitch is a little bit easier for customers to design their boards,” said Leitner.

In addition to eliminating some of the external components, the MM5140 also reduces design complexity. It helps simplify the development of RF front-end systems including transmitters and receivers, RF filters, and beamforming antennas used in advanced radio architectures and radar systems.

The MM5140 can replace large RF EMRs and RF/microwave solid-state switches in applications such as antenna tuning and beam-steering equipment used in 5G base stations. The integrated capability, along with the BOM count and the board savings, all stack up to a significant improvement over competing technologies, said Leitner.

The MM5140 can handle a lot of the same power requirements of an EMR in a much smaller size with much greater reliability, said Leitner. While EMRs might have operations in the millions, once an electrical voltage or RF signal is applied that derates them to hundreds of thousands of cycles, compared with three billion cycles for the MM5140, which is a 1000× improvement over traditional EMRs under a biased voltage or RF condition, he added.

Compared to solid-state switches, the MM5140 is fully functional from DC all the way to 6 GHz, and it tends to exhibit lower loss, said Leitner. “As you get up into the the upper band at 6 GHz, we typically will have lower insertion loss as compared to some of the other solid-state devices out there.”

The MM5140 has an IP3 of greater than 90 dBm and most Semiconductor switches may be in the range of 45 or 50 dBm, translating into hundreds to thousand times greater linearity than many solid-state switches, he said.

The MM5140, like all Menlo Micro Ideal Switch products, is said to deliver 99 percent reductions in size, weight, cost, and power loss, while providing a a long operating lifetime with no degradation in performance.

Evaluation boards and engineering samples of the MM5140 SP4T switch are now available. Production is scheduled for Q2 2022. Reference designs are expected to be available starting in June.