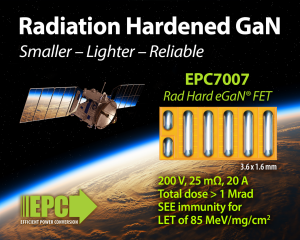 The EPC7007 devices are offered in a chip-scale package, the same as the commercial eGaN FET and IC family.  Packaged versions will be available from EPC Space. Engineering samples are available now, followed by full qualification for volume shipments in December 2022.