Allegro MicroSystems, Inc. has launched the A33110 and A33115 magnetic position sensors at the Sensors Converge Conference, June 27-29. The new sensors are the first to leverage both the company’s vertical Hall technology (VHT) with tunneling magnetoresistance (TMR) technology in a single sensor package. These sensors target advanced driver assistance systems (ADAS) applications.

Allegro MicroSystems describes the VHT + TMR combo offering as “a superior heterogeneous redundant sensor solution” and an “essential step toward enabling the reliability required for advanced levels of automation in vehicles.” 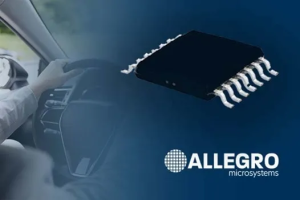 The 360° angle sensors provide magnetic angle sensing via both the primary (TMR) and secondary (vertical Hall) transducers. Each are processed by two independent channels, with independent regulators and temperature sensors. The primary TMR channel and secondary channel are capable of 14-bit and 10-bit noise-free resolution, respectively.

This configuration enables the high levels of safety and diagnostic coverage needed for automated driving, including ON-chip channel-to-channel angle comparison and independent processing in digital signal paths, with no shared digital resources, said the company.

In addition, advanced algorithms provide a fast response time, independent gain/offset correction, angle calculation, and linearization capabilities required by ADAS applications. The A33115 also includes a turns counter that tracks motion in 90-degree increments and a low-power mode with a user-programmable duty cycle that reduces power consumption when the IC is in a key-off position.

In addition, the VHT technology used in the A33110 and A33115 enables accurate safety checks, including low-field and missing-magnet detection. These sensors are ASIL D-compliant, with heterogeneous redundancy, which reduces the likelihood of dependent failures thanks to the VHT and TMR technologies, according to the company. They are also certified to AEC-Q100 grade 1