Boréas Technologies has launched the BOS1921 piezo haptic driver, designed for ultra-thin PC trackpads. Providing autonomous operation and sensing in a single chip, the BOS1921 eliminates the need for dedicated electronics that other piezo drivers require for force sensing, said the company, delivering both cost and space savings.

Delivering autonomous operation, the BOS1921 includes an integrated digital front end with a MIPI I3C interface and a waveform synthesizer (WFS) that eliminates the need for dedicated electronics, such as microcontrollers. The I3C is backward compatible with I2C for easy integration into most systems, said Boréas. 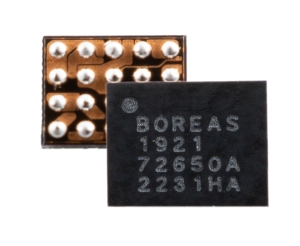 The combination of the autonomous operation and high-resolution sensing “reduce BOM costs by up to 2×, keeps piezo haptic trackpads thin, improves responsiveness, and provides 15× greater sensing resolution than the BOS1901, Boréas’ first-generation piezo haptic driver,” said the company. In addition, with 2 kB of RAM waveform memory, it generates HD haptic waveforms with minimal communication bandwidth, according to the company.

“The BOS1921 (and prior to it, the BOS1901) are small, ultra-low-power devices. They enable a new level of thinness in applications such as piezo haptic trackpads in laptops and notebooks,” Boréas told Electronic Products. “And this is a trend because there aren’t that many ways for PC OEMs to differentiate their products from competitors, so thinner, more responsive trackpad modules are very attractive at the moment.”

Like its predecessors, the BOS1901 is based on the company’s CapDrive piezoelectric actuator driver technology that delivers integrated sensing along with 10× power savings compared with competitive haptic platforms, said the company.

One of the key advantages of the integrated force sensing is that it eliminates dead zones on the trackpad unlike some other technologies.

The BOS1921 offers a 190 Vpk-pk (+/- 95V) output voltage and wide supply Voltage range of 3 V to 5.5 V, supporting a range of piezo actuators in applications such as PC trackpads, micropumps, and piezo fans. Other key specs include a dedicated SYNC pin that can synchronize multiple BOS1921 controllers to simultaneously drive multiple actuators within 2 μs and a typical start-up time of less than 300 μs.

The BOS1921 is sampling to key customers now with production scheduled for the second quarter of 2023. Development kits will be available in the near future.

Pricing of the BOS1921 will be very similar to the BOS1901, said Simon Chaput, the founder and CEO of Boréas. Customers will get higher performance and a lower cost module design “at the same low price as the BOS1901,” he added.

Chaput said the company will continue to offer the BOS1901 for designs that require the SPI interface.