Here is a selection of power semiconductors launched at the show. First up are GaN devices that claim breakthrough performance in areas of size, power density, and efficiency. 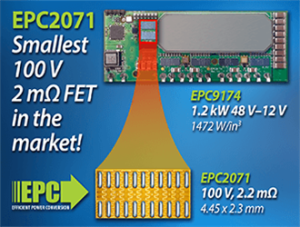 Claimed as the smallest 100-V, 2 mΩ GaN FET, the EPC2071 is suited for space-constrained applications with demanding requirements for high-power-density performance. Applications include BLDC motor drives, including e-bikes, e-scooter, robots, drones, and power tools as well as telecom and server power supplies, and solar inverters.

The EPC2071 is footprint compatible with EPC’s prior Generation 4 family of products: the EPC2021, EPC2022, and EPC2206. However, the Generation 5 improvement in area × RDS(on) gives the EPC2071 the same on-resistance as the prior generation with a 26% smaller size.

Compared to a silicon mosfet, the EPC2071 is one-third the size with the same RDS(on) , and the dead time can be reduced from 500 ns to 20 ns to optimize the motor and inverter efficiency as well as to reduce acoustic noise, said EPC. In addition, the QG is one-fourth that of the silicon MOSFET.

Both the EPC2071 and EPC9174 demonstration board are available for immediate delivery from Digi-Key. EPC also offers a cross-reference tool for designers who are interested in replacing their silicon mosfets with a GaN solution. 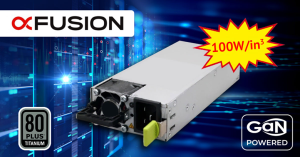 GaN Systems and xFusion Digital Technologies Co., Ltd. (xFusion) introduced the xFusion 3-kW power supply unit (PSU), touted as the first 100-W/in3 with 80 Plus Titanium efficiency solution. Reaching power densities up to 100 W/in3 with 96+% efficiency, results in power supplies half the size and half the power loss compared to silicon-based power supplies, according to GaN Systems.

The switch to GaN System’s power transistors demonstrated increased performance for products with power levels from 800 W to 6 kW.

“For each set of 10 racks in the data center, GaN-based PSUs can increase profits by $3 million and reduce the cost of operating a data center and CO2 emissions output by more than 100 metric tons per year,” said the company.

“Compared with traditional silicon chargers, GaN chargers can achieve 3× the power or 3× faster charging with up to 40% energy savings in just half the size and weight of legacy silicon solutions,” said Navitas. It also runs 20× faster than traditional silicon, added the company. 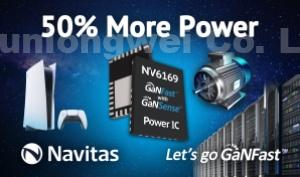 The NV6169 is the highest-power-rated IC in the third-generation integrated GaN platform. The GaN power IC is rated at 650 V for nominal operation plus an 800-V peak-rating for robust operation during transient events. The GaN gate is fully-protected and the device is rated at an electrostatic discharge (ESD) specification of 2 kV.

In motor-drive applications, GaN ICs deliver up to 40% energy savings versus silicon IGBTs, eliminate 30 external components, and increase system efficiency by 8%, according to the company.

The NV6169 is available immediately to customers under NDA. Mass production lead times range from six to 16 weeks. Simulation models (PSPICE/LTSPICE/SiMetrix), a 3D package model (STP), and an application note (AN-0016) are available.

Here are the figures of merit for the UF4C/SC series:

All RDS(on) options (23, 30, 53 and 70 milliohm) are offered in the industry-standard 4-lead kelvin source TO-247 package. Qorvo said this provides “cleaner switching at higher performance levels.”

The 53- and 70-milliohm devices are also available in the TO-247 3-lead package. These devices provide optimal thermal performance and high reliability thanks to advanced silver-sinter die attach and advanced wafer-thinning process.

All 1,200-V SiC FETs are included in the company’s FET-Jet Calculator, a free online design tool that evaluates the efficiency, component losses, and junction temperature rise of devices used in a variety of AC/DC and isolated/non-isolated DC/DC converter topologies. Single and paralleled devices can be compared under user-specified heat-sinking conditions.

Both onsemi and Infineon beefed up their silicon and SiC power portfolios. Onsemi’s new products unveiled at PCIM include a a TO-Leadless (TOLL) packaged SiC MOSFET, along with a new power bundle for USB-C PD (power delivery) charging above 100 W, and a 1200-V FS7 IGBT.

Onsemi claimed the the industry’s first TOLL-packaged SiC MOSFET. Until recently, SiC devices had been supplied in D2PAK 7-lead packages, which required significantly more space, said onsemi. The TOLL package offers a 30% savings in PCB area over a D2PAK package and with a footprint of 9.90 × 11.68 × 2.3 mm, it offers 60% less volume. 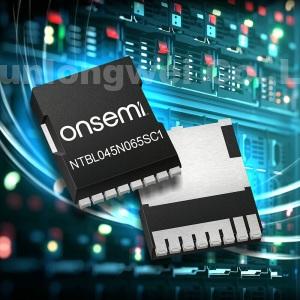 In addition to its smaller size, onsemi said the TOLL package offers better thermal performance and lower package inductance (2 nH) than a D2PAK 7-lead package. The SiC MOSFET also features a Kelvin source configuration that ensures lower gate noise and lower switching losses, including a 60% reduction in turn-on loss (EON) when compared to a device without this configuration. This results in significant improvements in efficiency and power density as well as improved EMI and easier PCB design, said onsemi.

The first SiC MOSFET offered in the TOLL package is the NTBL045N065SC1, targeting applications such as SMPS, server and telecommunication power supplies, solar inverters, uninterruptible power supplies (UPS), and energy storage. The device is suitable for designs that are required to meet the most challenging efficiency standards including ErP and 80 PLUS Titanium.

The NCP1623 is a small form factor boost power factor correction (PFC) controller rated up to 300 W for USB PD fast charging adapters and computing power supplies. The device operates in critical conduction mode (CrM) at heavy loads before entering discontinuous conduction mode (DCM) as the load decreases. This is said to maximize the efficiency at both nominal and light loads. The NCP1623 can increase efficiency up to 2% at low input voltages and offers a sleep mode of <100 μA, which optimizes the no load input power state.The NCP4307 is high performance driver for synchronous rectification (SR) MOSFETs in multiple high performance switch-mode power supplies topologies. The device will self-supply from an internal 200-V CS pin, enabling high side configuration and low VOUT without requiring an auxiliary supply, said onsemi. The dual VCC pin selects the optimal VCC source to minimize losses, resulting in optimization across a wide range of VOUT applications.

Onsemi also demoed its 7th generation IGBT and diode for the first time. The latest 1200-V FS7 IGBT offers a 20% lower forward bias voltage compared to the previous generation, which improves the efficiency and power density in motor control application. The company also is launching a fast-version FS7 IGBT for medium-high switching frequency applications in solar, UPS, and energy storage, in which the switching loss is 50% improved, reported onsemi. The FS7 portfolio also includes the 750-V and 1200-V VE-Trac Direct automotive-qualified solutions.

Infineon Technologies AG has its expanded CoolSiC portfolio with high-voltage solutions that address 1500-VDC applications such as next-generation photovoltaic, EV charging and energy storage systems. These include the 2-kV SiC MOSFETs and 2-kV SiC diode, addressing the challenges in these 1500-VDC-based designs, which include fast switching at high DC voltage.

Infineon also offers a range of EiceDRIVER gate drivers with functional isolation of up to 2.3 kV to support the 2-kV SiC MOSFETs. Samples of the 2-kV CoolSiC MOSFETs are available now in EasyPACK 3B and 62-mm modules. This will be followed later in a new high-voltage discrete TO247-PLUS package. Infineon rolled out the new Easy 3B module with the launch of the  MH1 1,200-V CoolSiC MOSFET, which offers a maximum temporary junction temperature of 175˚C for greater overload capability.

Infineon also launched the TRENCHSTOP 1700-V IGBT7 chip in the standard EconoDUAL 3 industrial module package. With the new IGBT7 chip technology, the EconoDUAL 3 claims leading current of 900 A and 750 A and enables an improved power range for inverters. These new IGBT modules target a range of applications including wind turbines, motor drives, and static VAR generators (SVG).

Compared to modules with the previous IGBT4 chipset, the new FF900R17ME7_B11, with the TRENCHSTOP IGBT7 chip, enables up to 40 percent higher inverter output current in the same package size, said Infineon. In addition, the 1700-V IGBT7 modules feature significantly lower static and dynamic losses while addressing applications with static losses in diode chips, added the company.

Other features include enhanced dv/dt controllability, improved diode softness, and an improved FIT rate, which is an an important parameter when working with high DC link voltage, said Infineon.

These new power modules, with an integrated temperature sensor, offer a maximum overload junction temperature of 175°C. They are qualified for industrial applications according to relevant tests of IEC 60747, 60749, and 60068. 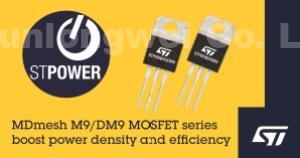 ST said each device offers the best maximum RDS(on) in its category, at 45 mΩ for the STP65N045M9 and 43 mΩ for the STP60N043DM9. With very low gate charge (Qg), typically 80 nC at 400-V drain voltage, these devices have the best RDS(on) max Qg figure of merit currently available, said the company.

The gate threshold voltage (VGS(th)), typically 3.7 V for the STP65N045M9 and 4.0 V for the STP60N043DM9, minimizes both turn-on and turn-off switching losses compared with the previous MDmesh M5 and M6/DM6 devices. They also feature a very low reverse recovery charge (Qrr) and reverse recovery time (trr), which further contribute to improved efficiency and switching performance.

In addition, ST’s latest high-voltage MDmesh technologies features an additional platinum diffusion process that is said to ensure a fast intrinsic body diode. The peak diode-recovery slope (dv/dt) is greater than earlier processes. All MDmesh DM9 devices can withstand dv/dt up to 120 V/ns at 400 V.

The MDmesh M9 and DM9 devices, the STP65N045M9 and STP60N043DM9, both in a TO-220 power package, are in production and will be available at distributors by the end of Q2 2022. Additional standard surface-mount and through-hole package options will be added later in 2022.