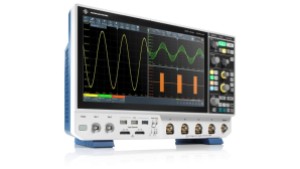 The R&S MXO 4 series, described as the first in the next generation of oscilloscopes, are available in four-channel models with bandwidths of 200 MHz, 350 MHz, 500 MHz, 1 GHz, and 1.5 GHz. The 12-bit ADC in the MXO 4 series offers 16 times the resolution of traditional 8-bit oscilloscopes at all sample rates without any tradeoffs for more precise measurements, said R&S.

With an update rate of 4.5-million acquisitions per second, R&S claims the MXO 4 series offers more signal activity than any other available scope. One of the key benefits is helping development teams “get a better understanding of physical layer signals and test faster.”

This faster update rate is thanks to a 200-Gbits/s processing ASIC. The company said it is one of several new R&S hardware and software technology blocks developed and implemented for the first time in the MXO 4 series.

The MXO 4 series also offers standard acquisition memory of 400 Mpts ON all four channels, which gives the instrument up to 100 times the standard memory of comparable instruments, said R&S.

“In addition to bandwidth and sample rate, memory depth is an important factor and determines whether an oscilloscope can handle a large range of troubleshooting tasks,” added the company. “More acquisition memory enables oscilloscopes to capture more time and retain rated bandwidth information for shorter time base settings.”

“The new hardware and software technology blocks and architecture allowed our development team to achieve a once-in-a-decade engineering breakthrough,” said Dr. Andreas Werner, vice president oscilloscopes at Rohde & Schwarz, in a statement. “Our customers will experience a whole new level of performance, and all at a price more affordable than has ever been seen on the market.”

Touting greater resolution precision than any other oscilloscope, the MXO 4 series uses a 12-bit ADC that operates across all the instrument sample rates with an 18-bit vertical resolution architecture. The scopes also are said to deliver the lowest noise and largest offset range (+/- 5 V with a 500 uV/div scaling) in its class.

In addition, all MXO 4 series scopes come standard with a digital trigger, which R&S said was previously only available in higher performance oscilloscopes with higher price points. Complementing the 18-bit architecture, the trigger sensitivity of 1/10 000 division can isolate small physical layer anomalies in the presence of large signals. “No competitive oscilloscope has this degree of trigger sensitivity for isolating small signals,” said R&S.

R&S said the MXO 4 series is the first oscilloscopes to offer a spectrum acquisition rate of 45,000 FFTs (Fast Fourier Transforms) per second, compared with comparable oscilloscopes that deliver fewer than 10 FFTs per second.

For a better user experience the MXO 4 series features a 13.3” full-HD capacitive touchscreen and an intuitive user interface. Other features include a small footprint, low audible noise, VESA mounting, and a rackmount kit for installation in integrated environments.