Orca Systems was founded in 2004 as a digital RF intellectual property (IP) and semiconductor design engineering services provider, and transitioned to a fabless semiconductor business model in 2018. The ORC3990 design, based on the company’s RF, analog, digital transceiver, and power management domain assets and expertise, is the company’s first product launch.

“LEO satellites are going to be very compelling for network-based IoT services and very cost effective,” said Brian Sprague, Orca’s chief operating officer. “They can determine location for free, so no GPS device is needed. It’s a worldwide network and can track anything anywhere in the world.”

With the advantage of providing connectivity anywhere, the race for satellite IoT connectivity for everything from shipping container and pallet tracking to livestock tracking and smart agriculture, is starting to heat up but it requires meeting challenges around power consumption, price, and size.

Orca Systems believes it has addressed these challenges with the ORCA3990 wireless SoC designed for Totum’s LEO network. Totum’s initial network consists of 18 6U cubesat satellites, each about the size of a breadbox. 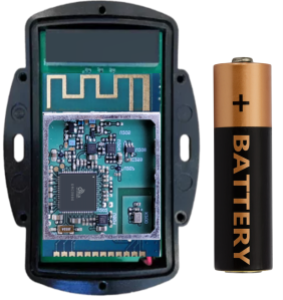 The SoC integrates all required system functions for satellite IoT connectivity in a small 68-QFN package. For simple “tracker-on-a-chip” applications, a sub-$10 endpoint solution is possible based on the ORC3990 SoC, according to Totum, which is a cost point expected to drive high-volume demand. It also can operate with a couple of AA batteries for up to 10 years.

A key building block of the SoC design includes Orca Systems’ third-generation Live Wireless RF and digital radio subsystem, customized to support the requirements of Totum’s LEO satellite network. This building block can be customized for any customer’s application.

In addition, the SoC’s on-chip sensor provides the temperature of an ORC3990-based IoT endpoint. The device also supports a suite of digital and analog interfaces that allows it to connect to a variety of sensors such as temperature, humidity, shock, vibration, and flow. 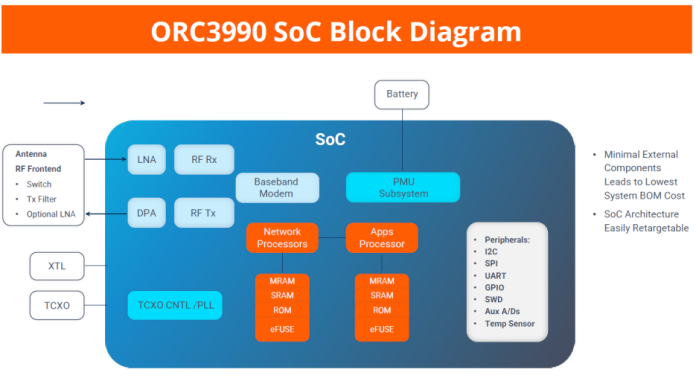 The Orca team faced three big challenges with the Totum design, including power dissipation, price, and indoor location. This was on top of the complexity involved in designing a highly integrated SoC.

The first biggest challenge was ‘how do we get cost out of this’ and the second challenge is power dissipation, said Sprague. “We’re hitting the low power dissipation and price point that is very unique, and it’s going to enable a lot of volume and some of the applications we see in the IoT market.”

A third challenge, which is unique to Totum, is the way this is architected so it can track indoors, said Sprague. Although it can only track within 50 feet, it will be able to track a pallet or piece of equipment, for examples, inside a warehouse, he added.

“And from a semiconductor standpoint all of the RF is on-chip – the LNA, the power amp, the RF receiver and transmitter, and the modem – and integrating all that is no simple challenge either, so the level of integration, the price point, the power dissipation, indoor location, those are all critical and challenges that were associated with this project,” Sprague said.

The complexity due to the level of integration and getting first silicon working and communicating in both directions with the satellite in a short period of time was a challenge and it showed the company’s abilities in a fully integrated multi-CPU architecture with a very new type of memory, said John McDonough, Orca’s CEO.

“We use an embedded magnetic memory from Global Foundries, which has challenges of its own, but it allows you to have a device with no external memory, so no booting from external memory. Everything is integrated and instant on,” said McDonough.

Orca also developed a new DMSS satellite modem for Totum. It is “quite sophisticated, with integrated power management, an integrated transceiver, and importantly the 23 dBm power amplifier, so we have everything in this device that you could possibly include to bring the BOM [bill of materials] down as much as possible,” he added.

A Totum satellite technology based terrestrial endpoint for a LEO network using the ORC3990 SoC reduces the external components to a temperature-compensated crystal oscillator (TCXO), passive filters and switches, a PCB antenna, and a battery.

This offers the highest level of integration, said Sprague. “There are two processors, which is a very common architecture for endpoints or any kind of communication where one processor is used to communicate on the network and the other is running the endpoint application, and attached to those processors is Flash, SRAM, ROM, and an e-Fuse.

“The ROM includes the boot ROM and there is no external memory; all the memory is on-chip, and in addition there are all the peripherals that are needed to interface to external sensors, which could be flow, humidity, biometric, and maybe a water sensor, so we can interface to virtually any sensor that you want to have in an IoT applications to one of the digital or analog-to-digital inputs,” he added.

In comparison to other solutions, the LNA, DPA, and RF receiver and RF transmitter would probably be multiple chips that would be implemented as discrete components, and there is the baseband modem, said Sprague. “And if you’re using a proprietary standard you would implement that in an FPGA, so we’re an order of magnitude below anyone else’s BOM.”

McDonough also noted that not requiring an on-board GPS chip is probably the single most significant component that was eliminated from the BOM, which would be required in most other IoT or other satellite solutions. The GNSS GPS chip “is an expensive and power-hungry device and it is avoided altogether in our architecture.”

In addition, with the power management unit integrated, it not only saves cost but it also leads to a much longer battery life versus using an external PMU, he added.

Orca’s design team put a lot of effort into the power management portion of the design and took a system-level approach to the challenge of battery life and power consumption.

“We needed to define numerous power domains that different parts of the chip could run at and make sure that we provided efficient power to each of those,” said McDonough.

“As an example, we are running the logic in this chip at 0.65 V and the nominal voltage for the process is 0.8 V, which is already low, so we get a big improvement in power going from 0.8 V to 0.65 V, and instead of taking power directly from the battery and converting that to .65 V with a Linear Regulator we use a DC-to-DC converter on-chip to efficiently drop the Voltage,” he added.

McDonough also said the integration of the non-volatile program memory on-chip and instant-on feature is a “huge power-saving feature,” and the SoC has a very sophisticated sleep/awake system and 11 separate power management regulator-related IPs for efficient use of current and power throughout the life of the product.

“On the point of battery end of life, we added a mechanism so that if the battery is getting close to its end of life and the battery voltage is drooping we can make use of that battery until it drips down quite far because we have things like power-on reset and brown-out reset monitors in our chip. So we’ve really put a lot of effort into this problem,” he added.

Orca delivered a first-time-right silicon in one year of design time. The company attributes this to GlobalFoundries’ 22FDX 22-nm FD-SOI technology in combination with is reuse of its SoC architecture, circuitry, and methodologies.

Orca Systems is the exclusive provider and manufacturer of the ORC3990 SoC to Totum and its partners. Evaluation/demonstration boards and software SDK are available.