This article was published in the first issue of “Net Security No. 26 Courtyard”[Qian Xinren]column 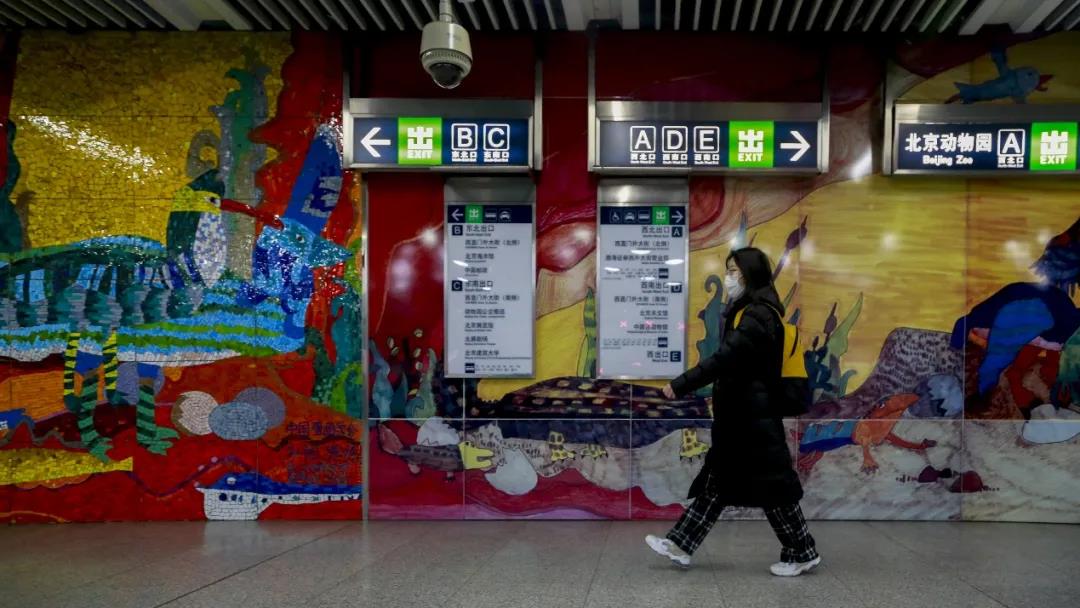 At 9 a.m. ON December 28, 2020, Beijing Metro Line 4 Zoo Station was busy. At Exit C, there are many young people dressed up as IT people. Dong Ling, a 2020 graduate of North China Electric Power University, majoring in computer science, is one of them.

“The arrival of so many young people seems to have started in March and April.” Auntie Li, the subway guide, was still somewhat impressed. “It used to be rare, and many of the people who got off at this station were parents who took their children to the zoo, or went to the surrounding market to buy clothes.”

What brought this change directly was the subway entrance 200 meters away.Qi’anxin Xizhimen Security CenterLaunch in 2020.It was upgraded and transformed from the original Wanrong Tiandi market. As soon as it appeared, it became the former “moving batch” area.New Landmark of National Fintech Innovation Demonstration Zone, and also turned the neighborhood into another gathering place for IT people in Beijing after Zhongguancun, Houchangcun and Wangjing. It was at this time that Dong Ling joined Qi Anxin.

In fact, most of Dong Ling’s classmates chose to enter the power system research institutions as their first choice. “It’s a bit like taking a civil servant exam. It’s relatively stable, but I want to go to an enterprise. The enterprise must constantly adapt to the needs of the market, and the technology update will be faster.”

Dong Ling, who is full of thirst for new technologies, did not take the power system exam and wanted to enter the enterprise. The job search was also very smooth. In September 2019, Dong Ling, who was still studying at school, signed a contract with a Beijing-based company, but received an interview notice from Qi Anxin in October.

“I am studying computer. In addition to finding a job, I want to choose an application direction for long-term development. Network security is not the most popular direction, but I think with the deepening of the Internet’s transformation of traditional industries, people are more and more reliant on the network. The higher the level, the more important cyber security will be in the future. Of course, my understanding of cyber security was still limited at that time, but I knew that Rich & Anxin was the leader in this field.”

Although the olive branch extended a little later, facing her favorite network security company, Dong Ling still prepared very carefully, and finally received the offer. “I’m very happy, it’s a dream come true. But there are still some concerns, because at that time I had signed a contract with another company, and if I terminated the contract, I would have to pay a lot of liquidated damages.”

The problem of liquidated damages that Dong Ling was worried about was later resolved satisfactorily with the full assistance of the Qi’anxin School Recruitment Team. In July 2020, Dong Ling, who walked out of the school, officially became a member of Qi’anxin Application Technology R&D Center No. 1. The team she belongs to mainly supports the company’s cloud security production line.

This is a very important production line. With the digitalization process of government and enterprise units, it has become a trend for various services to go to the cloud or cloud.

No detours with the internal GPS navigation system

“My mentor is Feng Peng, and everyone calls him Master because his technical level is excellent. Under his guidance, I have learned a lot. I often submit Merge Requests (merge requests), waiting for the master to merge. Busy, but every time he will seriously review the code and propose revisions to the corresponding problems, including many details such as non-standard naming, method merging, etc. The master’s rigorous working attitude urges me to pay attention to details and abide by the code in future development. specification.”

“If there is no mentor system, even if I have the intention to guide, the sense of responsibility will not be too strong. Now because of the relationship between master and apprentice, I will focus on giving apprentices more business guidance. And, to be honest, in the process of mentoring apprentices, I am myself in business. They will consciously demand high standards from themselves. This kind of “binding” will allow teachers and apprentices to promote each other in teaching and learning.” Instructor Feng Peng felt that he was also very rewarding.

With the internal “GPS”, Dong Ling did not take detours and had more time to “practice internal skills”. “In the first job, it is not ruled out that some people may have a springboard mentality, but more people attach great importance to the first step in the workplace. They value their own growth and the future more than salary or job comfort.” Fan Xin, who recruited the group, felt that this group had obvious commonalities.

“After I came here, I found that network security was different from what I had understood before. I learned a lot of things that I had never seen before, and it was a systematic study.” Like all school enrollments in the R&D line, the department and Dong Ling have made a detailed mid-term study plan. The learning content ranges from the basics of front-end R&D, including JavaScript, CSS, etc., to independent listening needs, and then can independently undertake project R&D.

Thanks to these tailor-made mechanisms for school enrollment, Dong Ling successfully completed the transition from a student to a professional, and gradually completed the work in the project according to the guidance. She has participated in honeypots, virtualized reconstruction of some modules, CSC, Luban and other projects.

“Dong Ling’s foundation is very good, and the progress is very obvious. In the development of the Luban project, the product concept is somewhat abstract. Whenever she understands some products or gets feedback, she can review the previous implementation and make corrections or improvements. No Satisfied with the realization of the function, there is a will and action to develop in a better direction, which is commendable.” Instructor Feng Peng recognized his apprentice very much.

Every Line of Code Matters to Customer Satisfaction

On July 22, Qi Anxin successfully landed on the Science and Technology Innovation Board. At 8 in the morning, Dong Ling watched the live broadcast of the listing ceremony on her mobile phone in the subway. “I feel very proud. This is a very important milestone in the company’s development. I very much hope that my efforts will be included in the future development of the company.”

After several project experiences, Dong Ling, who has grown rapidly, quickly became a reality. In early November 2020, Dong Ling began to be independently responsible for a new round of iterations of the cloud network security analysis system. The cloud network security analysis system is an innovative component of the cloud security management platform, providing a lightweight flow visualization solution for cloud network full traffic collection and distribution in hybrid cloud scenarios.

This round of iteration is to continue to enhance the monitoring of various indicators during the operation of the system’s mining and distribution function. By introducing a visual monitoring panel, it can help customers locate problems quickly and in a timely manner. At the same time, optimize the strategy module, further simplify the configuration logic and Display the organizational form from the front end, reduce the difficulty of getting started, and improve the customer experience. “In general, it’s about making the system smarter, simpler, and better to use.” 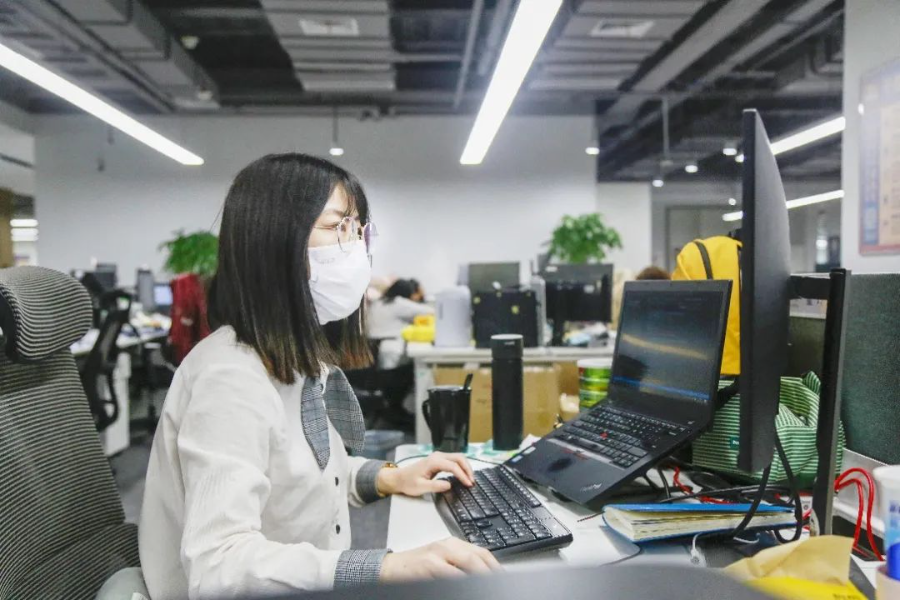 “People generally think that the post-90s are more self-conscious, have a poor sense of responsibility, and have a poor sense of service. But in my work, I really realized the meaning of being responsible and striving and giving priority to customers. These eight words are very common, but they are not simple.

At first, I just participated in the project, submitted the work after finishing the work at hand, and went home after get off work. Now I will repeatedly confirm each function point in the development process, and try to self-test the corresponding problems through more test cases to reduce the bug rate.

Every line of code may be related to the customer’s final experience. The more I think about it and the more I do it, the more satisfied the customer will be. “At present, this round of iterative basic research and development work of the cloud network security analysis system has ended and entered the testing stage.

“What I like the most is the strong technical atmosphere of the company, which allows a R&D novice like me to have the opportunity to get started independently, and the results of R&D will directly face customers. This is the best way to apply what you have learned.”

From researching and developing Xiaobai to independently in charge of projects, the growth of Dong Ling’s enrollment in the class of 2020 is not an isolated case.

The offspring are terrifying and cute. At the end of 2020, Qi Anxin’s 2021 school enrollment received a surprise gift box from the company. The reason why it is called a surprise is because the school recruitment team collected the addresses of all the students on the grounds of distributing “entry materials”, and the gifts were also tailored. The gift box is printed with each student’s name and exclusive blessing. The box contains an exclusive work card, Qi Anxin’s customized mouse and a random Winter Olympics mascot. This dedication is especially warm in this extremely cold winter. The students have posted their own exclusive gift boxes in the school recruitment group and shared their own personalized blessings. Many students still posted their first Moments in 2021 at 0:00 on New Year’s Eve, giving them to Qi Anxin, nicknamed “Tiger Factory”. It’s so lively!

As a newcomer in the workplace, school enrollment may still have a long way to go before achieving impressive work results. But when there are caring and guiding leaders and peers who help each other on this road, when personal struggles are combined with the company’s vision, the individual can gain growth and the present, and the company can gain progress and the future. When you are responsible for struggle, there is no struggle without youth.

Zoo Station is Beijing’s super-large urban commuter hub. Every day, the rail transit extending in all directions sends young people like Dong Ling to the company. More friends with fresh plan ideas and active technical ideas are welcome to take a ride, and Qi Anxin will be at the station ahead.