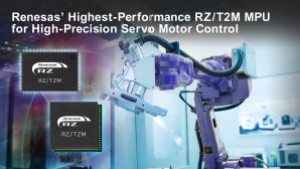 By integrating the peripheral functions for motor control, the RZ/T2M MPUs reduce the number of external components needed in the solution, which translates into lower bill-of-materials (BOM) costs and product size, said Renesas. In addition, by connecting the peripheral functions used for motor control to a dedicated bus linked directly to the CPU it enables the CPU to access these functions with low latency.

The RZ/T2M series is built around two Arm Cortex-R52 cores with a maximum operating frequency of 800 MHz. The MPUs also offer a large memory capacity (576 KB), which is tightly coupled with the CPU. This reduces the fluctuation in execution time that can occur when cache memory is used and also delivers deterministic, fast-response processing, said Renesas.

The MPUs support multiple industrial Ethernet communication protocols and next-generation time-sensitive networking (TSN) networks. In addition to industrial networking protocols such as EtherCAT, PROFINET RT, and EtherNet/IP, the new processors add support for the PROFINET IRT protocol. They also include an Ethernet switch that supports the TSN standard, allowing multiple devices to operate in precise synchronization. 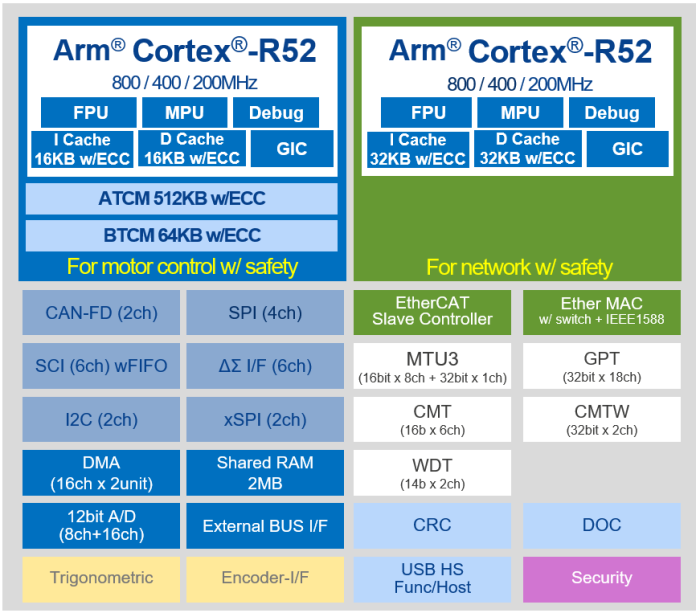 The RZ/T2M also eliminates the need for two additional external MCUs for safety monitoring in building industrial equipment. It has a hardware configuration designed for functional safety, so only one external MCU is needed, said Renesas. The MCUs can perform functional safety operation in parallel with motor control and network communication.

The RZ/T2M MPUs are available now. An evaluation board, the Renesas Starter Kit+ for RZ/T2M, also is available for initial evaluation of the RZ/T2M.