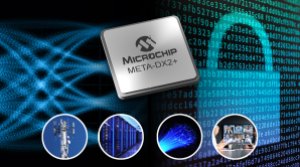 The four new META-DX2+ PHYs support Ethernet data rates from 1G to 800G and include advanced features including encryption, port aggregation, 112G PAM4 SerDes, and Class C/D precision timing. The portfolio also includes footprint-compatible retimers. Together, these devices enable the addition of MACsec and IPsec encryption based ON a common board design and software development kit, said Microchip.

Like the META-DX2L retimer, the META-DX2+ PHYs can be used with Microchip’s PolarFire FPGAs, the ZL30632 high-performance PLL, oscillators, Voltage regulators, and other components that have been pre-validated as a system.