Researchers at the Tokyo University of Science (TUS) have developed a new electrolyte material that improves the conductivity of magnesium ions at room temperature, paving the way for the next step in the development of magnesium-ion (Mg2+) batteries. Seen as a lower-cost alternative to lithium ion, Mg2+ batteries have faced big hurdles due to the poor conductivity of magnesium ions in solids at room temperature, said researchers.

“The lithium-ion battery has the advantage in gravimetric energy density and thus is suitable for mobile use (e.g., phone),” said Masaaki Sadakiyo, Ph.D, junior associate professor at the Faculty of Science Division I, Department of Applied Chemistry at TUS. But lithium (Li) is a rare element, he said.

“ON the other hand, an Mg2+ battery has the advantage in volumetric energy density and cost (i.e., less use of a rare element), which would be advantageous in stationary use (e.g., power storage for renewable energy),” he added. “Considering that Li is a limited resource in the earth, large-scale power storage in the future world should be replaced by other batteries such as Mg2+.”

Magnesium is a promising material for solid-state batteries due to its abundance, and Mg2+-based energy devices have high energy densities, high safety, and low cost, said researchers. However, the wide application of Mg2+ has been limited by its poor conductivity in solids at room temperature, they reported: “Mg2+ has poor solid-state conductivity because divalent positive ions (2+) experience strong interactions with their neighboring negative ions in a solid crystal, impeding their migration through the material.”

Researchers at TUS believe they have solved the chemical’s limitation with a metal-organic framework (MOF)-based Mg2+ conductor with superionic conductivity at room temperature. The Mg2+ electrolyte achieved a superconductivity of 1.9 × 10–3 S cm–1, the threshold for practical application in solid-state batteries, they reported.

Researchers shared their findings in a study published in the Journal of the American Chemical Society. A key result reveals that the conductivity is the highest reported to date for a crystalline solid with Mg2+, overcoming a decades-long roadblock.

Sadakiyo, who led the study “New Magnesium Superionic Conductor Towards Lithium-Free Solid-State Batteries,” described the materials used as MOFs that have highly porous crystal structures, which enables the efficient migration of the ions.

The researchers introduced a “guest molecule,” acetonitrile, into the pores of the MOF, which accelerated the conductivity of Mg2+. 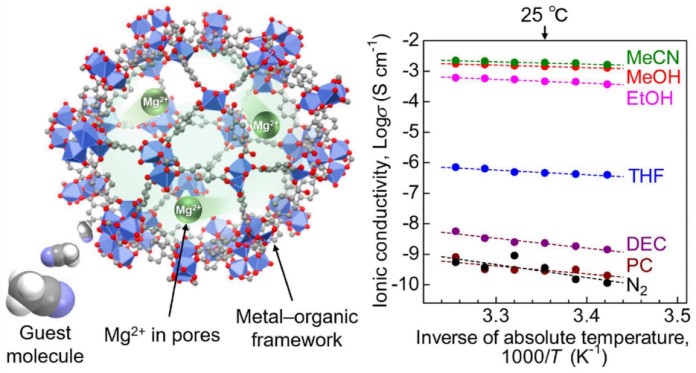 The Mg2+ conductor consisting of a metal-organic framework. Click for a larger image. (Source: Masaaki Sadakiyo, Tokyo University of Science)

“Our paper is related to the development of an electrolyte for solid-state batteries (i.e., Mg2+ conductor),” said Sadakiyo. “We prepared a new Mg2+ conductor and cleared its ion-conducting mechanism. We clarified that Mg2+ confined in the pores of some specific solid material (i.e., MOF) efficiently migrates under some specific organic vapors and that the resulting Mg2+ conductivity is high enough to be applied for battery.”

The team used a MOF called MIL-101 as the framework, encapsulating the Mg2+ ions in its nanopores. This created an MOF-based electrolyte where the Mg2+ was loosely packed, allowing the migration of divalent Mg2+ ions. Then to improve the ion conductivity, they introduced the electrolyte to acetonitrile vapors. The samples were subjected to an alternating-current impedance test to measure ionic conductivity.

Other measurements and tests showed that the acetonitrile molecules adsorbed in the framework allowed for the efficient migration of the Mg2+ ions through the body of the solid electrolyte. This demonstrated the MOF-based Mg2+ conductor as a suitable material for battery applications.

The research team plans to apply this material to a “real” battery by collaborating with another lab. Sadakiyo thinks a specific license is not needed for commercial use since they did not get a patent and the work is already published. “However, at this moment, we think that there are many problems that should be improved by additional researchers in order to achieve real use for a battery.”

One of the next steps for the team includes creating “other novel materials showing higher Mg2+ conductivity with a higher Mg2+ transport number with less organic vapor pressure,” said Sadakiyo. The team also is “interested in enclosing the fundamental science of the multivalent ion (e.g., Mg2+) conduction in solid.”

In Sadakiyo’s opinion, we will not see commercial Mg2+ batteries available in the market for at least 10–20 years.

In addition to Sadakiyo, the research group includes Yuto Yoshida, also from TUS; professor Teppei Yamada from the University of Tokyo; and assistant professor Takashi Toyao and professor Ken-ichi Shimizu from Hokkaido University.