ON May 11, the Shanghai Stock Exchange announced that the IPO of Hefei Jinghe Integrated circuit Co., Ltd. (hereinafter referred to as: Jinghe Integrated Circuit) on the Science and Technology Innovation Board was accepted.

It is reported that Jinghe Integrated Circuit was established in May 2015. Jinghe Integrated Technology Co., Ltd. is mainly engaged in the 12-inch wafer foundry business. labor service. The company has now achieved mass production of 12-inch foundry platforms for 150nm to 90nm process nodes, and is in the process of developing a 12-inch foundry platform for 55nm process nodes. In the initial stage of Jinghe integration, the main products are panel driver chips. In the follow-up, it will be guided by customer needs, combined with the development trends of flat panel Display, automotive electronics, household appliances, industrial control, artificial intelligence, Internet of Things and other industries, to further expand microcontrollers (MCUs). ), CMOS image sensor (CIS), power management, artificial intelligence Internet of Things (AIoT) and other chip foundries in different application fields, and is one of the leading integrated circuit manufacturers in China.

The Jinghe Integrated Circuit IPO plans to raise 12 billion yuan, and all the funds raised will be invested in the second 12-inch wafer manufacturing project of Hefei Jinghe Integrated Circuit Co., Ltd., aiming to build a 12-inch wafer with a production capacity of 40,000 wafers per month. The foundry production line will expand the issuer’s production capacity and business scale, thereby further enhancing the company’s industry status.

A total loss of nearly 3.7 billion yuan in three years

It is reported that during the reporting period, the company’s net profit attributable to ordinary shareholders of the parent company was -1,190,951,200 yuan, -1,243,026,700 yuan and -1,257,597,100 yuan, after deducting non-recurring The net profits attributable to ordinary shareholders of the parent company after profit and loss are -1,253,816,800 yuan, -1,347,529,900 yuan and -1,233,334,200 yuan respectively. When the company changed from a limited liability company to a joint stock limited company as a whole, as of September 30, 2020, the benchmark date of the share reform, there were accumulated unrecovered losses, mainly because the company was in the stage of ramping up production capacity during the share reform, and the operating income could not cover the R&D and production that occurred during the same period. As of December 31, 2020, the company’s audited undistributed profit was -4,368,584,600 yuan, and the company’s profit available to shareholders for distribution was negative. 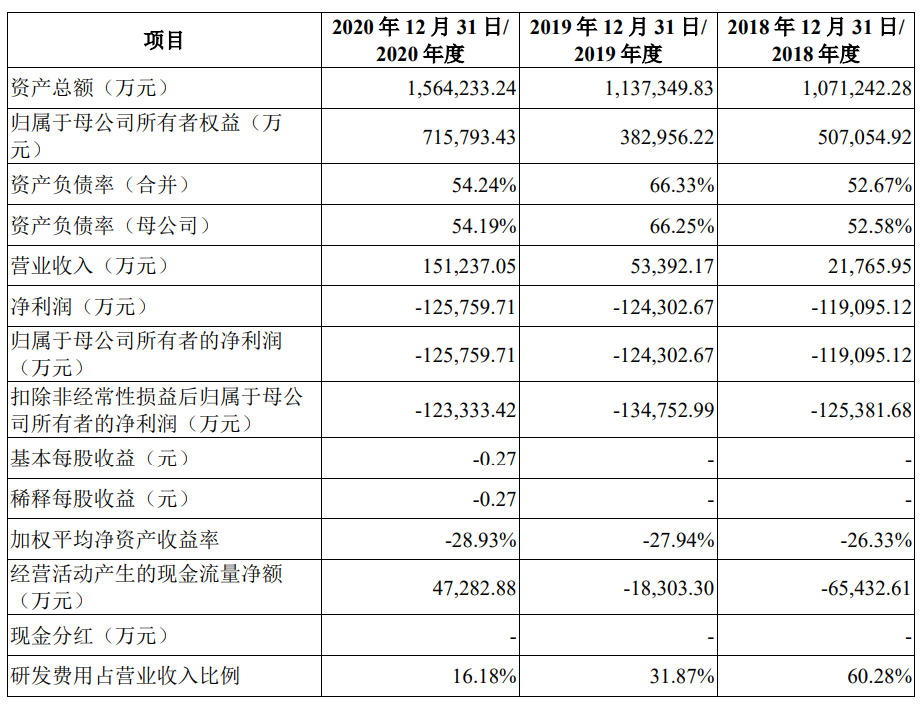 During the reporting period, the issuer provided customers with foundry services for DDIC and other process platforms. The composition of main business income classified by process platform is as follows.

In addition, the filing shows that during the reporting period, the total sales revenue of the issuer’s top five customers was 217,085,600 yuan, 505,639,500 yuan, and 1,358,044,900 yuan, accounting for the proportion of operating income respectively. 99.74%, 94.70%, 89.80%, and the customer concentration is high. The issuer has established long-term business relationships with major customers and signed long-term framework agreements with some customers. If the issuer’s major customers have production and operation problems, resulting in a decrease in the number of orders placed by the issuer, the issuer may be affected. impact on the stability of performance. In the future, if the issuer cannot continue to deepen the cooperative relationship and scale of cooperation with existing major customers, and cannot effectively develop new customer resources and convert them into income, it may have an adverse impact on the issuer’s operating performance.

In terms of production capacity, the production capacity of the company in the reporting period was 74,860 pieces/year, 182,117 pieces/year and 266,237 pieces/year respectively, and the main business income was 217,659,500 yuan, 53,336. 010,000 yuan and 1,511,861,100 yuan, and the annual compound growth rate of main business income reached 163.55%. According to the statistics of Frost & Sullivan, JCIC has become the third largest pure-play foundry company in mainland China by revenue and the third largest 12-inch foundry capacity (excluding foreign-controlled companies), effectively increasing the Round the level of autonomy in the foundry industry.