NCAP ratings vary by region, but Euro NCAP has been driving the initiative for child presence detection (CPD) inside the car as part of its roadmap. Automakers can earn four Euro NCAP points by meeting sensor requirements to detect an unattended child inside a car.

Euro NCAP’s test and assessment protocol, released in May 2021, awards up to three points if the sensor can detect the presence of an unattended child and provide initial and escalation warnings. It is possible to earn an additional point by implementing an intervention mechanism, such as alerting the parent or turning ON the engine and air-conditioning unit. Automaker’s understand the importance of a safety feature like this and are working to meet demand from the consumer side.

Points aside, the biggest award is the potential to save children. Texas Instruments Inc.’s (TI) 60-GHz radar sensors make it possible for in-cabin sensing to go farther than ever before with a single sensor to detect an unattended child’s presence in the car’s second and third row including footwells, with greater accuracy and more cost effectiveness than alternative technologies.

The Federal Communications Commission recently approved waiver requests from multiple Tier-1 suppliers and original equipment manufacturers to operate 60-GHz radar inside vehicles at a higher output power than what was previously permissible, thus enabling the use of 60-GHz radar sensors for car interior sensing.

Detect a child in the third row with a single sensor

The potential to save children has been tested by various companies. For example, TI has performed several tests related to child presence detection inside a two-row SUV using the single-chip 60-GHz radar sensor. The tests included the detection of a child (simulated using a breathing doll) in a rear or forward-facing car seat or even laying in the footwell. Just one sensor could sufficiently detect the child (baby doll’s) presence and location across three rows, including the footwell (2nd and 3rd rows), with high accuracy.

New signal-processing techniques have improved the reliability of detection and accuracy. The wide field of view of the sensor allows detection across three rows of the car. There may be a few exceptions with regards to detection that enhanced signal-processing techniques could further improve. The accuracy is even better in a two-row SUV, with detection possible when the child is in the footwell of the driver or passenger seats in the first row.

Different mounting positions of a sensor have been tested to account for the van’s panoramic roof as you can see in Figure 1.

Figure 1: The sensor in an overhead mount position in the center of the minivan (Source: Texas Instruments Inc.)

Figure 2 demonstrates the sensor’s accuracy in detecting occupants in the van. As you can see, a single sensor can not only detect the presence of the child (doll), but also its exact location inside a car, in front seat footwells.

The example of using a single-chip solution as mentioned above can help automakers comply with Automotive Safety Integrity Level (ASIL) B system.

Figure 2: Detection of a child (baby doll) in the third row of a minivan (Source: Texas Instruments Inc.)

Some sensors come with a built-in crypto engine that provides enhanced security functions like secure boot mechanism. This encrypts the sensor image and protects against image theft and hacking of the sensor. Automotive Open System Architecture (Autosar) stack is validated and available from leading vendors for integration.

Another test shows the detection and localization of as many as five occupants inside a two-row SUV with approximately 99% accuracy, again employing a single sensor in the overhead mount position (Figure 3). TI has tested occupancy with people in different seating positions. The results show that it is possible to use single sensor solutions to implement seat belt reminder systems.

mmwave radar sensors can help meet child presence detection standards for Euro NCAP to achieve a higher star rating and provide an important safety feature to drivers, and automakers can offer these benefits with a single chip for a simpler, more streamlined design.

In the big picture, when we make cars safer for families and children, everyone wins. 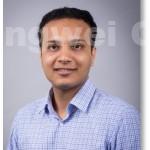 Kishore Ramaiah is a marketing and applications manager for mmWave Radar at Texas Instruments. In this role, Kishore is focused on enabling radar sensing applications for automotive in-cabin applications. Since joining TI in 2010, he has held various engineering, marketing, and product management roles. He has a master’s degree in Electrical Engineering from University of Texas at Dallas.