How to Avoid Distortion Effects of Printed Circuit Board PCB Design

“In fact, printed circuit boards (PCBs) are made of electrically Linear materials, ie their impedance should be constant. So, why does a PCB introduce nonlinearity into the signal? Here’s the answer: PCB layout is “spatially nonlinear” relative to where the current flows.

In fact, printed circuit boards (PCBs) are made of electrically linear materials, ie their impedance should be constant. So, why does a PCB introduce nonlinearity into the signal? Here’s the answer: PCB layout is “spatially nonlinear” relative to where the current flows.

Whether the Amplifier draws current from this supply or another depends ON the instantaneous polarity of the signal applied to the load. Current flows from the power supply, through the bypass Capacitor, and through the amplifier into the load. The current then travels from the load ground (or the shield of the PCB output connector) back to the ground plane, through the bypass capacitor, and back to the source that originally provided that current.

The concept that current flows through the path of least impedance is incorrect. How much current flows through all the different impedance paths is proportional to its conductivity. In a ground plane, there is often more than one low-impedance path through which a large proportion of ground current flows: one path directly to the bypass capacitor; the other, which excites the input Resistor before reaching the bypass capacitor. Figure 1 illustrates these two paths. The ground return current is what really causes the problem. 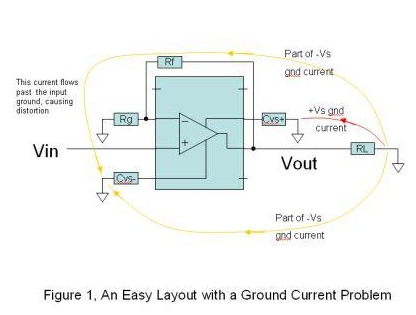 When the bypass Capacitors are placed in different positions on the PCB, the ground current flows to the respective bypass capacitors through different paths, which is the meaning of “spatial nonlinearity”. If a significant portion of the ground current component of one polarity flows through the ground of the input circuit, only the voltage of that polarity component of the signal is disturbed. However, if the other polarity of the ground current is not disturbed, the input signal Voltage changes in a non-linear manner. Distortion occurs when one polarity component changes while the other does not, and it manifests as second harmonic distortion of the output signal. Figure 2 shows this distortion effect in exaggerated form. 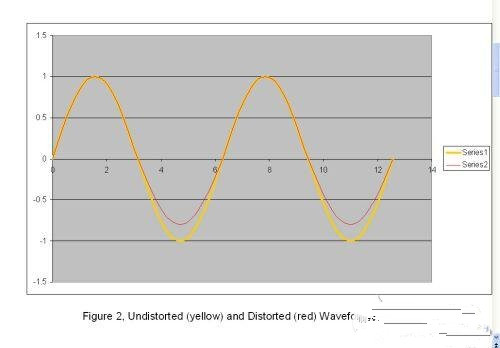 When only one polar component of a sine wave is perturbed, the resulting waveform is no longer a sine wave. Simulating an ideal amplifier with a 100Ω load, passing the load current through a 1Ω Resistor, and coupling the input ground voltage on only one polarity of the signal, yields the results shown in Figure 3. The Fourier transform shows that the distorted waveform is almost entirely second harmonic at -68dBc. At very high frequencies, it is easy to create this level of coupling on the PCB, which can destroy the excellent anti-distortion characteristics of the amplifier without resorting to too many PCB-specific nonlinear effects. When the output of a single op amp is distorted by the ground current path, the ground current flow can be adjusted by rearranging the bypass loop and maintaining the distance from the input device, as shown in Figure 4. 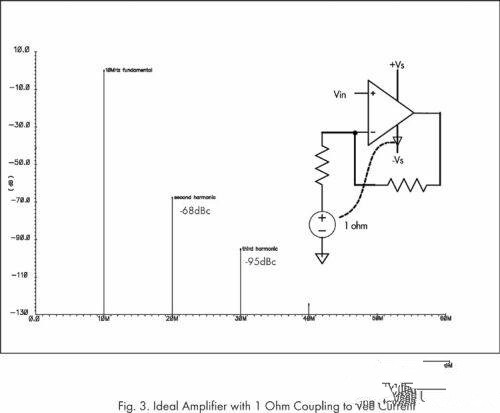 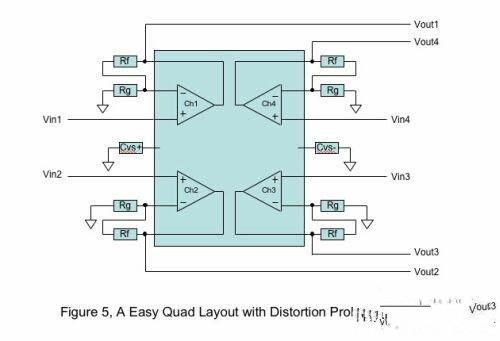 The problem is more complicated with multi-amp chips (two, three, or four amplifiers) because it cannot keep the ground connections of the bypass capacitors away from all inputs. This is especially true for quad amplifiers. There are inputs on each side of the quad amplifier chip, so there is no room for bypass circuits that mitigate disturbance to the input channels.

To avoid this problem, let the ground current perturb the input, but let the PCB current flow in a spatially linear fashion. To achieve this, bypass capacitors can be placed on the PCB in such a way that (+Vs) and (CVs) ground currents flow through the same path. If the positive and negative currents perturb the input signal equally, no distortion will be produced. Therefore, place the two bypass capacitors next to each other so that they share a common ground point. Because both polar components of ground current originate from the same point (output connector shield or load ground) and return to the same point (common ground connection for bypass capacitors), both positive/negative currents flow through the same path . If the input resistance of a channel is perturbed by the (+Vs) current, the (CVs) current has the same effect on it. Because the perturbation is the same regardless of the polarity, no distortion will occur, but it will cause a small change in the gain of this channel, as shown in Figure 6.

To verify the above inference, two different PCB layouts were used: a simple layout (Figure 5) and a low-distortion layout (Figure 6). The distortion produced by Fairchild’s FHP3450 four operational amplifiers is shown in Table 1. The typical bandwidth of FHP3450 is 210MHz, the slope is 1100V/us, the input bias current is 100nA, and the operating current of each channel is 3.6mA. It can be seen from Table 1 that the channel with more severe distortion has better improvement effect, so that the performance of the four channels is close to equal.

How to Avoid Distortion Effects of Printed Circuit Board PCB Design

Without an ideal quad amplifier on the PCB, measuring the effect of a single amplifier channel can be difficult. Clearly, a given amplifier channel perturbs not only its own input, but also the inputs of other channels. The ground current flows through all the different channel inputs and has different effects, but is affected by each output, and this effect is measurable.

Table 2 shows the harmonics measured on the other undriven channels when only one channel is driven. The undriven channel exhibits a small signal (crosstalk) at the fundamental frequency, but also produces distortion directly introduced by ground currents in the absence of any significant fundamental signal. The low-distortion layout of Figure 6 shows that the second harmonic and total harmonic distortion (THD) characteristics are greatly improved because ground current effects are almost eliminated.

Summary of this article

The golden rule for high-frequency PCB layout is to place the high-frequency bypass capacitors as close as possible to the power pins of the package, but comparing Figures 5 and 6 shows that modifying this rule to improve distortion characteristics will not make much difference. The improved distortion characteristics come at the expense of adding about 0.15 inch long high frequency bypass capacitor traces, but this has little effect on the AC response performance of the FHP3450. PCB layout is important to get the most out of a high-quality amplifier, and the issues discussed here are by no means limited to high-frequency amplifiers. Lower frequency signals like audio have much more stringent distortion requirements. The ground current effect is smaller at low frequencies, but can still be a significant issue if a corresponding improvement in the desired distortion specification is required.