While the electric vehicle (EV) industry is actively exploring the use of solid-state lithium batteries, the technology has not yet begun its migration to the estimated one billion plus wearables, hearables, and IoT sensors that are shipped each year. This is about to change with the advent of rechargeable 1 milliampere-hour (mAh) to 100 mAh solid-state lithium microbatteries designed specifically for small, connected devices.

Solid-state lithium technology will remove the design limitations and system complexity that lithium-ion (Li-ion) coin-cell batteries have imposed ON product developers. It will combine higher energy density with a smaller, rectangular cuboid (rather than cylindrical) form factor whose length, width, and height can be customized to suit the end-product. The technology will also enable a microbattery to be placed on a printed circuit board (PCB) using the same standard reflow assembly processes as the other components in the connected device.

Harnessing these capabilities requires an understanding of how solid-state lithium microbatteries are designed and manufactured, and how they can be integrated into the end-product assembly process.

Small, connected devices have unique requirements that are increasingly difficult for Li-ion coin-cell batteries to meet. This is primarily because of their energy density, charging, and form factor limitations.

Manufacturers who needed something other than the traditional round coin-cell form factor have often adopted lithium-polymer (Li-po) alternatives. These batteries can fit, for instance, into the curved shape of a smart ring. They also deliver only half or less the energy density by volume of Li-ion and require a noticeably thicker section to accommodate their height.

While these problems can be eliminated with solid-state lithium technology, it only becomes feasible if the battery does not use a lithium metal anode. This type of anode must be deposited on top of the battery electrolyte during manufacturing. Because of lithium’s sensitivity to moisture and air, it requires a zero-humidity insert and an argon (AR)-based environment adding cost and complexity to the process while limiting scalability.

In the years since these foundational achievements, additional work has been required to solve the many interfacial challenges of integrating the anodeless chemistry’s materials into a commercial microbattery that meets connected-device performance requirements. Especially challenging is achieving low enough impedance to meet higher volumetric energy density and faster charging needs, as well as higher cycles with room to grow.

Figure 1 shows an example of an anodeless battery chemistry and its various elements. In its initial pre-charge/as-manufactured state, the solid-state lithium microbattery is anodeless as shown in Figure 1a. 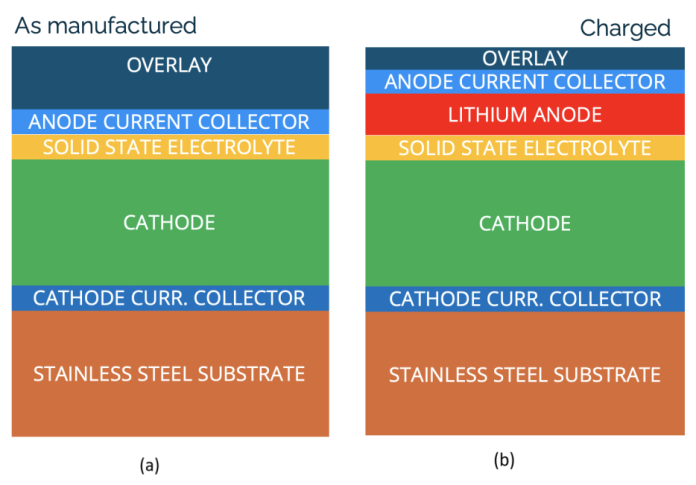 Figure 1. Diagram of material composition of a solid-state lithium microbattery: (a) discharged/as-manufactured state and (b) pre-charged/charged state. (Source: Ensurge Micropower)

Developers of small, connected devices are now preparing for the arrival of rechargeable solid-state lithium microbatteries that meet their needs. The more they know about the technology’s benefits the better they can leverage them. Starting at the design ideation phase and on through assembly of the final product, these benefits include:

The next generation of connected devices will need significantly higher energy storage per unit volume, or volumetric energy density (VED), which is calculated by dividing battery capacity by volume and measured as watt-hour per liter (Wh/l). If two batteries have the same capacity and one is twice the size, then the smaller one has twice the VED (see Figure 2). 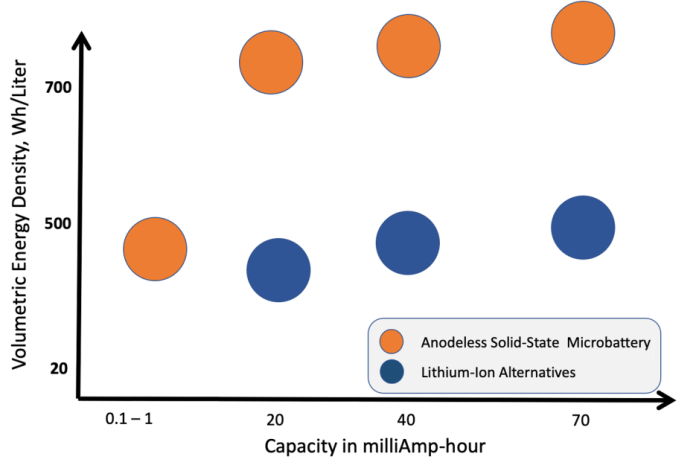 VED is optimized in a solid-state lithium microbattery using an ultra-thin (10-micron) steel substrate that consumes as little space as possible in the microbattery architecture. Further VED improvements come through ultra-compact stacking and packaging of the energy-producing cells within the battery. Together, these capabilities enable two to three times the VED of Li-ion microbatteries that need space-consuming safety mechanisms and interior packaging to protect their vulnerable electrolyte from the damaging effects of the ambient atmosphere. 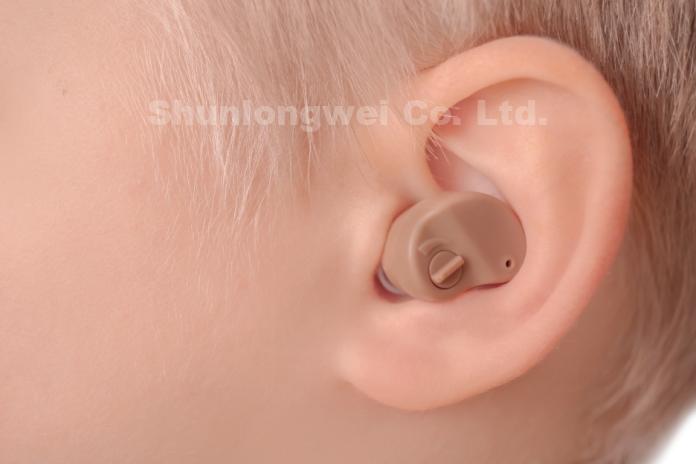 Figure 3:  With anodeless solid-state batteries, hearing aid designers will have new options for products that fit better in the ear canal, operate longer, and are easier to manufacture. (Source: Ensurge Micropower)

Solid-state lithium technology will deliver fast-charging capability while supplying high current pulses for wireless communication. Li-ion microbatteries can only supply up to twice the rated current, so product designers tend to use higher capacity batteries just to meet the pulse current requirement. Solid-state lithium microbatteries solve this problem by delivering more than 10 times the rated capacity.

In the past, a cylindrical form factor was the easiest for manufacturers to build. A Li-ion battery’s liquid electrolyte also required special, protective packaging. While prismatic and rectangular pouch batteries are available for smart watches, smartphones, and other larger capacity devices, these options haven’t typically been available for connected-health hearables and wearables. Plus, Li-ion batteries are generally available only in a small range of standard sizes.

In contrast, solid-state lithium microbatteries enable customizable rectangular form factors. With the advent of anodeless solid-state lithium chemistries for the 1 mAh to 100 mAh product category, it is now possible to use proven high-volume roll-to-roll manufacturing techniques to deposit the microbattery’s cathode and solid electrolyte. The unit cells are then cut from the roll at customized lengths and widths, and the rectangular cells are stacked to the desired height based on the specific capacity and the end-product’s requirements.

Solid-state lithium technology’s advantages over Li-ion will also give developers the opportunity to look at old challenges in new ways. For instance, with Li-ion, if designers need, say, a 30-mAh capacity, they typically pick one 30-mAh battery rather than two 15-mAh ones. This is because the total volume of two 15-mAh batteries would be too high.

This isn’t the case with solid-state lithium microbatteries. Two 15-mAh microbatteries can be used if they are a better fit for the product.

Alternatively, product developers could optimize their product designs for either longer battery life or expanded feature sets, or a balance of the two. The most space-constrained products will have different requirements than those that must deliver the most challenging combination of connected-device features.

Li-ion batteries require a protection circuit for safety, which is not required for a solid-state lithium battery. Eliminating this circuit reduces component count and the bill of materials (BOM) costs while simplifying the product design.

An anodeless solid-state lithium chemistry not only simplifies battery manufacturing but also enables the use of standard surface-mount technology (SMT) when assembling the batteries onto PCBs with a low temperature (up to 160°C) reflow profile. Since there is no or minimal lithium anode in the solid-state lithium microbattery, especially in as manufactured or substantially discharged state, the lithium does not react to the high temperature in the SMT oven during the assembly process.

Secondly, the microbattery is constructed of unit cells that are stacked, encapsulated, and then metallized at the side ends to create electrical terminations for direct PCB connection. This will make solid-state lithium microbatteries look more like multi-layer ceramic Capacitors (MLCCs) than traditional batteries.

The low-profile, rectangular cuboid-shaped solid-state lithium microbattery will join other surface-mount components in the typical SMT process. This will save PCB area, reduce assembly time, and eliminate the cost of a coin cell socket and manual assembly or soldering required by Li-ion batteries (see Figure 4). 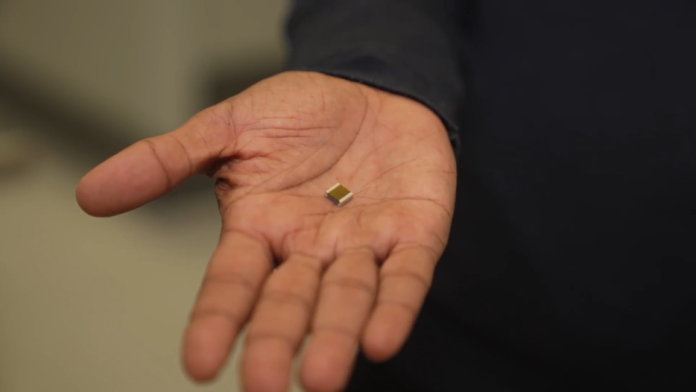 Solid-state lithium microbattery technology is poised to enable a variety of new connected devices while significantly improving the current ones. These applications range from slimmer and more fashionable feature-rich fitness and health tracking rings to hearing assistance products with expanded processing and connectivity features that look more like consumer ear buds than hearing aids.

Developers will also have significantly more options on their product innovation journey. These include a combination of form factor freedom, simpler designs with lower BOM costs, and the ability to pack significantly more capabilities into smaller devices that can operate for longer periods between charges and recharge much more quickly. 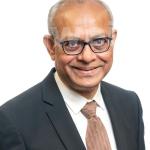 Vijay Parmar is a veteran of the wearable, IoT, and connectivity industry. He joined Ensurge from the venture capital world, where he sourced and managed venture investments while also serving as an executive board member of a manufacturer of biometric wearable identity/cybersecurity products.  Prior to that he had senior leadership roles at IoT connectivity leader GainSpan where he was founder and CEO, M2M solutions provider ReZolt, Intel, and AMD, among others. Email: [email protected]