The integrated circuit colleges of major universities have sprung up like mushrooms after the rain.

At the same time, more and more enterprises realize that talents are crucial to the development of enterprises. Recently, Huawei has made another “big move” in talent recruitment.

Integrated circuits are strategic, basic and leading industries that support economic and social development. Taiwan’s “Business Times” reported on July 13 that the mainland is making every effort to develop semiconductors. Business consulting agencies recently released data showing that with the strong support of policies, the number of mainland chip-related companies has increased rapidly, with an increase of 18,800 in the first half of the year, an annual increase of 171.8%. Up to now, the total number of chip-related companies in mainland China has reached 72,000.

Although my country’s integrated circuit industry has developed rapidly in recent years, the shortage of professional talents has become increasingly prominent.

In 2003, my country established the “Integrated Circuit Design and Integrated System” major, which was adjusted to an ad hoc major in 2012. In 2020, the Academic Degrees Committee of the State Council and the Ministry of Education issued a notice to set up the “interdisciplinary” category, and set up the first-level disciplines of “Integrated Circuit Science and Engineering” and “National Security” under this category.

Huazhong University of Science and Technology

On July 14, 2021, the School of Future Technology and the School of Integrated Circuits of Huazhong University of Science and Technology were officially inaugurated. They will focus on the new round of scientific and technological revolution and the general trend of industrial transformation, and are committed to cultivating innovative talents in related fields and promoting industrial development. Academician Ding Han is the Dean of the Future Technology College, and Professor Miao Xiangshui is the Dean of the Integrated Circuit College.

On April 22, 2021, the School of Integrated Circuits of Tsinghua University was officially inaugurated. According to reports, the School of Integrated Circuits will be jointly established by the original Department of Microelectronics and Nanoelectronics and the Department of Electronic Engineering, and will leverage the multidisciplinary advantages of Tsinghua University to explore the “1+N” joint mechanism, covering the entire integrated circuit industry chain, focusing on Memory, reconfigurable computing, EDA, Semiconductor equipment and materials, etc.

The School of Integrated Circuit Science and Engineering of Hangzhou Dianzi University will be located in Yuecheng District, Shaoxing, Zhejiang, with a total planned land area of ​​about 500 mu. It is understood that Shaoxing has more than 50 integrated circuit industry projects such as SMIC and Changjiang Electronics Technology.

On January 20, 2021, the Integrated Circuit College of Shenzhen Vocational and Technical College was established. After its establishment, it will face the entire integrated circuit industry chain, including integrated circuit design, manufacturing, packaging, testing, EDA software and other industrial fields, focusing on serving the integrated circuit design industry in Shenzhen, and training and mastering circuit design, device physics, process technology, and material preparation. , automatic testing, packaging, assembly and other knowledge and skills of innovative technical skills. The college has established close cooperative relations with more than 10 companies such as Arm, TI, China Microelectronics, Solomon Systech, and Zhongke Loongson.

The school and more than 20 enterprises and scientific research institutes including Quanzhi, Spreadtrum, MediaTek, and Electronic Five have set up a “cross-unit, cross-college, and cross-professional” characteristic class to jointly cultivate professionals in the field of integrated circuits.

In 2020, integrated circuit related colleges have emerged. On October 22, 2020, Nanjing University of Integrated Circuits was officially unveiled, which will be the first university in China named for integrated circuits. On November 11, 2020, the Integrated Circuit Industry College jointly established by Shaoxing College of Arts and Sciences and SMIC (Shaoxing) Co., Ltd. was inaugurated at the College of Arts and Sciences.

In order to innovate the integrated circuit related professional personnel training mechanism, improve the quality of personnel training, and then promote the sustainable development of my country’s integrated circuit industry, in 2015, the Ministry of Education, the National Development and Reform Commission, the Ministry of Science and Technology, the Ministry of Industry and Information Technology, the Ministry of Finance, and the State Administration of Foreign Experts Affairs jointly issued a document, The list of the first batch of 9 colleges and universities to build demonstration microelectronics colleges was announced. At present, the number of colleges has increased to 28.

In any case, the establishment of integrated circuit-related majors and colleges will undoubtedly help the reserve of industrial chain strength, and will also promote the coordinated development of production, education and research in domestic chips.

Keeping up with the pace of talent training, it is necessary for enterprises to “afford to support”. More and more enterprises realize the importance of talents to the development of enterprises. Not long ago, the topic of “400,000 fresh graduates, OPPO madly recruits chip talents” once aroused heated discussions. Recently, “Huawei recruits ‘genius boys’ with an annual salary of over 2 million” has rushed to the hot search on Weibo. 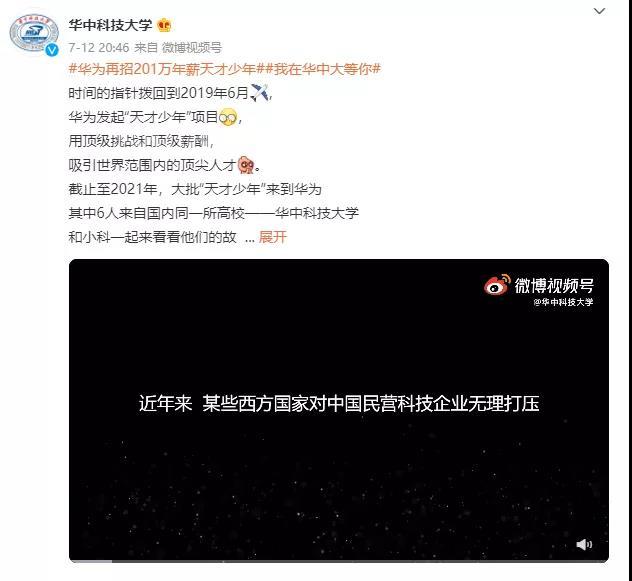 (Source: Official WeChat of Huazhong University of Science and Technology)

At present, Huawei is facing many uncertain environments. Huawei founder Ren Zhengfei previously stated that every system of the company must be adjusted to a state of charge, without rules and regulations, and use everyone’s ingenuity, fight heroically, and strive to move forward. He said: “Huawei will drag the world forward in the future and create its own standards. As long as it can be the most advanced in the world, then we are the standard, and others will move closer to us.” 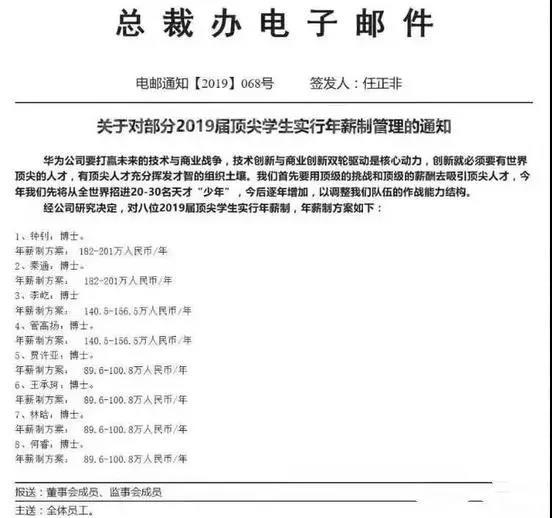 Ren Zhengfei also said that in order to compete for talents with American technology giants such as Google, Huawei’s respect for talents and high salaries have become one of the attractions. In his opinion: “These talented youngsters are like ‘loach’, drilling into our organization and activating our team. In the next 3-5 years, I believe that our company will have a new look. Win this ‘war’.”

It is understood that Huawei’s salary structure is mainly “basic salary + year-end bonus + dividends”. Compared with many Internet companies, Huawei’s basic salary is not high, with a starting salary of about 12,000 yuan for undergraduates and 14,000-16,000 yuan for graduate students. Usually, Huawei raises wages for its employees every year, and the average increase in basic wages is around 20%.

According to Huawei’s 2020 annual report, the company has about 197,000 employees, with salaries and other benefits costing 139.1 billion yuan. Calculated in this way, the average annual salary of employees is as high as 706,000 yuan.