Heavy!Chinese scientists have developed the world’s largest neuron-like brain-like computer, with a “brain volume” comparable to that of mice

Core things reported ON September 2 that the development of brain-like computing technology in my country has ushered in a new milestone: the major achievements of the billion-level neuron brain-like computer were officially released in Hangzhou on September 1.

Three standard server cabinets with a height of 1.6 meters stand side by side, and the red signal lights flash continuously. This brain-like computer named Darwin Mouse was jointly developed by Zhejiang University and Zhijiang Laboratory.

Brain-like computers can break through the bottleneck of traditional computing architecture by simulating the structure and operation mechanism of the human brain.

▲ Group photo of the research team

At present, this kind of brain computer has been running a variety of intelligent tasks, including multi-robot collaborative flood fighting and emergency rescue, listening to songs and recognizing music, and typing with ideas.

Most of the existing computers are based on the von Neumann architecture, with data storage and computing separated, but as Moore’s Law slows down, the limitations of this traditional architecture are becoming more and more obvious.

The communication bandwidth, latency, and power consumption caused by data transmission between storage and computing units have become key obstacles to improving the performance of contemporary computer systems.

According to Pan Gang, the head of the research team and a professor at the School of Computer Science and Technology of Zhejiang University, this computing mode restricts the improvement of computing performance represented by big data.

How to break through bottlenecks such as storage walls and power consumption walls in traditional computing architectures?

Simulating biological brains is regarded as an effective way by scientists.

Scott Hutter of Duke University’s Center for Cognitive Neuroscience once said: “The human brain is the most complex thing in the known universe, so complex that it makes the simple models that try to explain it laugh, and make Elaborate models are useless.”

In nature, the biological brain can naturally produce various intelligent behaviors such as foraging, communication, decision-making, olfactory recognition, and visual recognition in the process of interacting with the environment, while the energy consumption is very low.

Even insects with far fewer than 1 million neurons in their brains can perform a variety of intelligent behaviors that meet the needs of survival.

The new computing mode that uses hardware and software to simulate the structure and operation mechanism of the brain’s neural network is called brain-like computing. 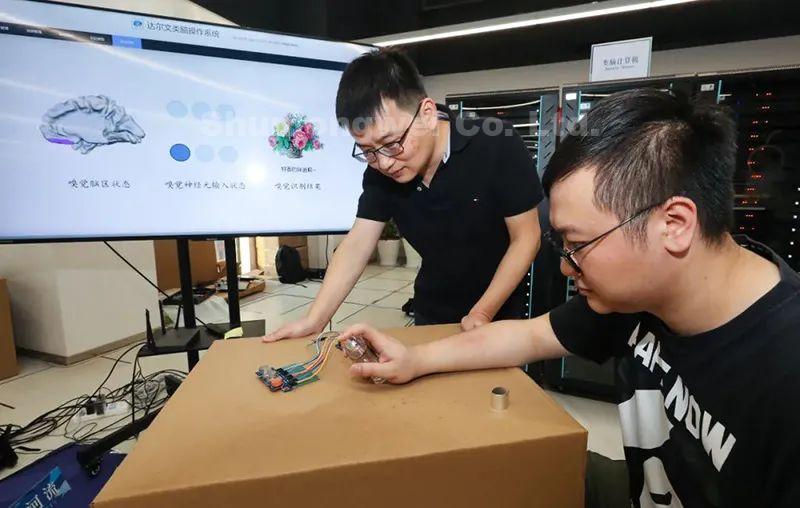 Brain-like computing is characterized by the integration of existence and computing, event-driven, highly parallel, etc. It simulates the neuron behavior of biology and transmits signals through pulses, which can achieve high parallelism, higher efficiency and lower energy consumption than traditional computers.

Previously, Zhejiang University successfully developed Darwin 1st generation and Darwin 2nd generation brain-like computing chips in 2015 and 2019 respectively. The chips are used to simulate the structure and functional mechanism of the neural network of the brain, and can process images, video, Natural language related tasks.

The major achievement of this release is to integrate 792 Darwin 2nd generation brain-like computing chips into three standard server chassis with a height of 1.6 meters to form a powerful rack-mounted brain-like computer.

With the brain-like operating system, multi-robot collaboration, listening to songs, and mind typing have been realized

According to Jin Xiaofei, the research backbone of the project, there are 150,000 neurons on each chip, and every 4 chips are made into a board, and several boards are connected together to form a module. 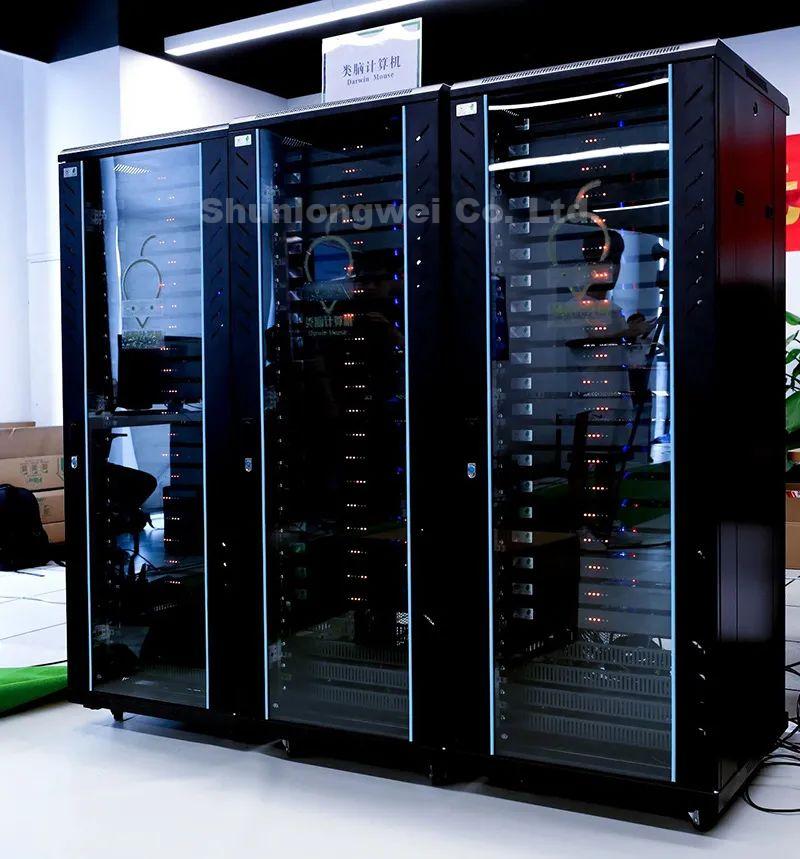 It’s easy to say, but to enable so many neurons to achieve efficient linkage combination and information flow distribution, software is needed.

The operating system is oriented to the hybrid computing architecture of von Neumann architecture and neuromorphic architecture, realizes unified scheduling and management of heterogeneous computing resources, and provides an operation and service platform for large-scale spiking neural network computing tasks.

On this basis, brain-like computers can be applied to both intelligent tasks in life and neuroscience research.

At present, researchers at Zhejiang University’s Yujiang Laboratory have achieved a variety of intelligent tasks based on the Darwin Mouse brain-like computer.

For example, the brain-like computer is used as the intelligent center to realize the collaborative work of multiple robots in flood fighting and emergency rescue scenarios. This task involves simultaneous processing of multiple intelligent tasks such as speech recognition, target detection, and path planning, as well as collaboration between robots.

The three robots with similar appearances undertake patrol, rescue and rescue tasks respectively. After simple training, they cooperate to carry out flood fighting and rescue tasks.

Robot No. 1 will call robot No. 3 to repair the dam after patrolling and find a breach in the dam, while searching for the injured. When the wounded is found, robot No. 2 will be called to rescue, and then robot No. 1 will continue to patrol elsewhere.

The functions of these robots are not fixed, but can be manipulated by different brain regions, assigning various tasks to robots 1, 2, and 3.

Another experiment is “listening to songs and recognizing songs”. The members of the research group sing two sentences of a song, and then the computer “sings” the content of the subsequent songs through recall.

According to Professor Tang Huajin, the backbone of the project, this is a brain-like computer that simulates the memory mechanism of the hippocampus to achieve access to memory information in the brain, which is different from our commonly used retrieval function.

The Darwin Mouse brain-like computer builds a memory model architecture by drawing on the network structure and neural mechanism of the hippocampus, which can simulate the memory-learning function of the hippocampus. Through the pulse coding of memory, the same model can learn and memorize different types of speech, songs, texts, etc. data.

With the help of brain-like computers, the researchers also realized the real-time decoding of steady-state visual evoked potentials of EEG signals, which can be “thought” typing input.

At present, brain-like computing research is still in its infancy, and it is far from the real human brain.

The goal of the researchers at the Hezhijiang Laboratory of Zhejiang University is that with the development of neuroscience and the maturity of the system software, tool chain and algorithms of brain-like computers, brain-like computers can one day be as generalized as von Neumann architecture computers. , really work efficiently like a brain, coexisting and complementing the von Neumann architecture to solve different problems.

Zhu Shiqiang of Zhijiang Laboratory revealed that the next step of the research team will continue to develop a brain-like computer software and hardware technology system that supports a larger neuron scale, and gradually realize open source and open source.

Academician Wu Zhaohui, President of Zhejiang University, said that brain-like computers will become the main form and important platform for computing in the future, and will play an important and unique role in simulating brain functions, efficiently implementing AI algorithms, and improving computing capabilities.

Facing the future, interdisciplinary convergence will become a new method to solve major problems, and systematic innovation based on multi-disciplinary and multi-domain will become an effective form of developing brain-like computers.