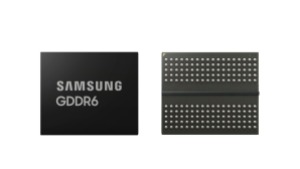 The 24-Gbit/s GDDR6 is based on an “innovative” circuit design and a highly advanced insulating material (High-K Metal Gate or HKMG) that is said to minimize current leakage. It will deliver 30% faster speeds compared to the previous 18-Gbits/s product, according to Samsung.

In addition, the GDDR6 DRAM can transfer up to 1.1-terabytes (TB) of data, or about 275 Full HD movies, in one second, when integrated into a premium graphics card. It is fully compliant with JEDEC specifications.

The new GDDR6 portfolio will also feature low-power options that help extend the battery life of laptops. Using dynamic voltage switching (DVS) technology which adjusts the operating Voltage depending on performance requirements, the company will offer 20-Gbits/s and 16-Gbits/s versions with approximately 20% higher power efficiency at 1.1 V, compared to the 1.35-V GDDR6 industry standard, according to the company.