Digital rights management (DRM) has long been a point of contention for anyone who consumes digital media. 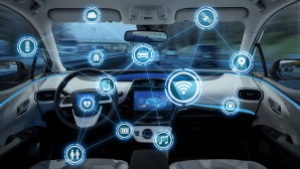 In 1983, a Japanese engineer named Ryuichi Moriya used a combination of encryption and specialized hardware to create the Software Service System, the first example of DRM technology. By 1998, when the U.S. passed the Digital Millennium Copyright Act (DMCA), companies were looking for ways to secure their digital IP and protect it from illegal copying and distribution.

A new sector is looking to make the most of DRM and everything it offers: the automotive industry. How can consumers expect to see DRM in cars take shape, and what will happen to the sector if “automotive as a service” gains momentum?

This isn’t the first time we’ve seen automotive manufacturers try to include DRM in cars. In 2013, the Renault Zoe shipped with a rented battery pack that the owners couldn’t replace without going through a licensed seller. Additionally, the car’s DRM could prevent the batteries from charging, essentially turning the car into a costly paperweight.

With the rise of electric vehicles and plug-in hybrids reshaping the automotive industry, the idea of a manufacturer being able to brick your car with the push of a button does not inspire consumer confidence.

The company explained that the feature required cellular connectivity, which incurred a monthly fee. Unfortunately, for cars built early in the tech’s run, it relied ON the mobile 3G network, which shut down in 2022. Toyota patched those vehicles so the feature would no longer require a subscription, but it still left a sour taste in consumers’ mouths.

These are just two examples of automotive companies inching their way into subscription models to bolster their bottom line in response to consumers keeping their cars for longer periods. Everything from heated seats and steering wheels to self-driving features and even extra horsepower or rear-wheel steering could all end up locked behind paywalls or tied to subscription services.

Automotive as a service

Every few months, someone will attach the tagline “as a service” to something we’ve already grown accustomed to in an attempt to upcharge for it or change how it’s perceived. The goal of turning something into a service is to add a fee for something that we already use.

When BMW locked its heated seats behind a paywall in the European market, it turned an amenity into “comfort as a service.” Big-name manufacturers like BMW, GM, Hyundai, and more are working on transitioning many of their optional features into mandatory subscriptions.

GM is the biggest offender in the news right now. The manufacturer recently announced that its OnStar service — previously optional — would become mandatory in newer models. New buyers who don’t want to pay for the subscription they might never use have one other option: Pay the entire amount up front, with costs ranging between $1,500 and $1,675 for a three-year subscription. The price is rolled into the cost of the vehicle, so even if you decide never to activate the subscription for the service, you’re still paying an extra $1,500 on top of the price of the car or SUV.

GM could have blamed inflation for the increased cost, raised the vehicle’s MSRP, and offered a free OnStar subscription as an incentive to purchase. Instead, they chose to push the narrative of automotive as a service and move into the territory of maligned subscription models.

Can consumers fight back?

Do consumers have the option to fight back against the rise of DRM in cars? Not individually. Preventing automotive manufacturers from implementing DRM in their vehicles or shifting to the automotive-as-a-service model will take a concerted industry-wide effort and may even require some legislative intervention. It isn’t as simple as telling someone to skip out on the new car.

Countries worldwide are working on legislation to ban the sale of new internal-combustion–engine vehicles between 2025 and 2040. Holding on to older vehicles when the infrastructure to support and power them no longer exists will put buyers at a distinct disadvantage and force them into purchasing a new car equipped with DRM and all the subscription services a manufacturer could dream of. The easiest way to fight back against DRM in cars is to start before the technology gets an even stronger foothold in the industry.

The growing popularity of EVs and the promise of self-driving cars is creating an environment ripe for the implementation of DRM in cars. Automotive as a service might sound good on paper, but it’s ripe for abuse and could leave people with fancy paperweights in their garages if they can’t afford their monthly subscription fees.

Emily Newton is a technical writer and the editor-in-chief of Revolutionized. She enjoys researching and writing about how technology is changing the industrial sector.