Sensors are essential component building blocks in the smart-city environment. The main role of these devices is to sense and gather data, which will ensure that the smart city will function smoothly and safely. Sensors and small systems communicate constantly through gateways and the internet cloud to various city control centers to keep smart-city services running smoothly.

There is a myriad of applications for sensors in a smart city, ranging from smart meters and smart grids to intelligent traffic systems and environmental monitoring (see Figure 1). 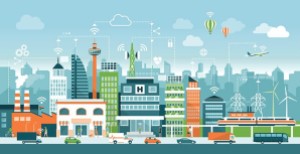 Sensor nodes can be deployed across a city to monitor key parameters like noise, traffic, and pollution levels. Data from these nodes can be transmitted to a central server, which will refine it and make it available to the general public.

Monitoring of air and noise pollution is crucial to the quality of life and health of smart-city citizens. As an example, Flowbird, based in France, developed its “Park & Breathe” system that measures both air and noise pollution in urban areas. The system can measure parameters such as noise (measured in decibels), nitrogen dioxide, and even fine particles.

One example of a smart-parking–sensor system is PNI Sensor Corp.’s PlacePod, an in-ground or surface-mounted sensor. The system communicates with a gateway providing real-time parking data over a low-power wide-area network. This system enables accurate vehicle detection in parking spaces, with up to 10 years of battery life, and is stable over temperature fluctuations, even in harsh environments (see Figure 2). 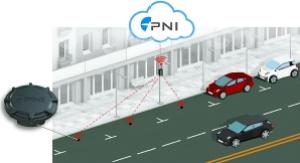 One example of a cost-effective solution for monitoring traffic in a smart city is Analog Devices Inc.’s multi-channel microwave radar Advanced Traffic Control Systems (ATCS). The essential sensors are microwave receiver antennas at 24 GHz, with backup video cameras as a redundancy system.

Video and radar detection is also being used in V2X applications. V2X is also being deployed in smart cities and their sensors are also microwave antennas.

Sensors, which can monitor the environment and especially pollution levels, are critical to a safe, healthy, clean environment. Another great idea is to deploy smart environmental sensors ON public buses, which actively cover a large area while traveling through parks, alleys, and side streets.

As an example, Bosch Sensortec offers a variety of environmental monitoring sensors that can be used in smart-city applications. These include pressure, humidity, and gas sensors.

Smart-city office buildings use a variety of sensor solutions that can be wireless with very low power technology.

Sensors in the smart-city workplace are becoming ubiquitous and many new sensors in buildings are emerging. These include the following:

Passive-infrared sensors can also be used to determine room, desk, and table occupancy as well as cubicle occupancy and people flow. For example, Pressac Communications Ltd. supports these applications and offers a variety of occupancy-, environment-, and energy-monitoring sensors.

Smart cities are test beds for population health strategies, improved traffic flow, and general sensor implementation to improve city life and leisure activities. Smart cities are reinventing the way we structure and construct buildings and organize cities for the future. Sensors make these things possible. There are also sensors in the background that can be worn and allow biometric data to be collected non-intrusively for health and wellness.

Sensors in a smart-city environment are also in walls, floors, and ceilings of homes and businesses to improve the life and health of the population. Sensors also exist on the roadways to optimize traffic flow and safely move vehicles about the city environment while protecting the city driver, passenger, and pedestrian residents. Smart-city neighborhoods nurture social connectivity as a way of life.