Chilixin thick film resistors rose by 60%, and everyone is betting on Yageo’s price increase

Earlier, Yageo announced that from March 1, the quotations of its two main products, MLCC (Multilayer Ceramic Capacitor) and Chip-R (Resistor), will be officially raised. The price increase is astounding. Among them, the price increase of MLCC has been increased from 30% to 50%, and the resistance has increased by 70% to 80% in one breath. It is not an exaggeration to describe it as crazy.

Yageo still uses the same reasons as before, low utilization rate and lack of employment. It’s just that this time, with the support of the high-energy buff of the epidemic, Yageo’s price increase is more confident. Although Yageo is intoxicated, the feedback from the market is very real. While the production capacity is declining, the terminal demand is also declining. The market has not yet reached the time of special shortage. What’s more interesting is that the original factory and end customers are all betting. There are original manufacturers who bet ON the right to get on the car with this wave of price increases, and then follow up; And the customer is betting that you can go up as much as you like, and I will change a car.

Chilixin: I bet on the right car, thick film resistors rose by 60%

Perhaps it was too lonely to see the big guy Yageo raising prices alone, and Chilixin stopped getting in the car after evaluating the order and the market response. On March 1, Wang Quan, a resistance company under Chilixin, suddenly announced that it will increase the quotation for direct customers and agents in Greater China, with an increase of more than 60%. 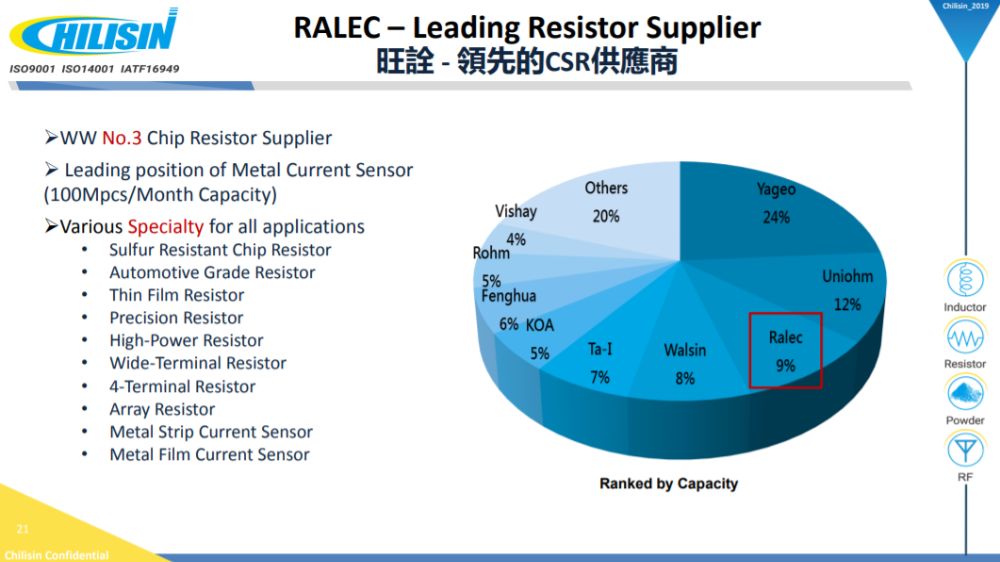 Relevant information shows that Wangquan Resistor production capacity ranks third in the world, and thick film resistor products account for 80% to 85% of its revenue. Regarding the reasons for the price increase, Chilixin said that the demand for orders is strong. In mid-January 2020, the price of Qilixin resistors had increased by 10% to 15%. Qilixin said at the time that, driven by 5G mobile phones and communication equipment, orders in the first quarter were bursting, and thick film The lead time for resistors is extended to 4-5 months, and the Inductor part is about 3-4 months. Among them, Mini Molding Chokes are relatively tight.
The increase was 60%. Mantianxin checked the previous data. This seems to be the highest increase in Chilixin’s history, and Chilixin said that it will not rule out further increases in the future.

Huaxinke: I won’t get in the car first

As Yageo’s main competitor in Greater China, Huaxinke is very real.
Gu Lijing, general manager of Huaxinke, said at his online legal meeting that Huaxinke’s factories are in Shenzhen and Dongguan, and the epidemic is not as serious as that of Yageo’s Kunshan and Suzhou factories. The current work resumption rate is about 75%, and the utilization rate has reached 50%. ~60%, and the Kaohsiung and Malaysia plants are currently at full capacity.
Gu Lijing said that although demand has slowed down due to the impact of the epidemic, customer demand has begun to recover slowly. The overall supply and demand are indeed tight, but they have not reached the level of a large shortage; the current Huaxinke inventory level is about 5 to 6 weeks. Coupled with the smooth resumption of work, the overall utilization rate of MLCCs and resistors is about 70%.

Gu Lijing even bluntly said that Huaxinke currently focuses on maintaining customer relationships, aiming to expand market share, and has the opportunity to gain more market share from major manufacturers such as Yageo, Japan and South Korea; as for the price increase, It’s not a good time right now.
Huaxinke’s main products include MLCC, which accounts for 72% of revenue, 19% for resistors, and 9% for others, including high-frequency radio frequency components, film Capacitors, and disc capacitors. MLCC expanded by 20% at the peak of the boom in 2018. At the end of 2019, the monthly production capacity is 40 billion, and the monthly production of resistors is 38 billion; it is expected that there will be a 10-15% increase in production capacity this year.

There is no doubt that Walsin Technology is betting on holding on to as much market share as it can, providing another option for customers who are unwilling to accept price increases. Similarly, Dayi, a resistor factory that had a slight price increase last year, did not want to get on Yageo’s price-raising car, so that it would have the opportunity to absorb Yageo’s transfer orders.

Customer: I bet there are goods that will not increase in price

From the perspective of market share, Yageo currently ranks among the top three in the world in terms of MLCC and resistor output, with resistors ranking first with a market share of 34%. But is it really impossible to open the pot if you leave Yageo?

It is reported that Yageo negotiated with customers after announcing the price increase. Judging from the meaning of several large ODMs, in addition to the customers who had to accept it, there were also many who refused to increase the price and turned to other sources of goods. After all, there are still some original factories that have not followed suit. Customers are betting that if you increase others, others will not increase. I will bear with it. Whether your price increase will be successful or not depends on your choice of market share.

Finally, there is one more thing to mention. At present, many Japanese and Korean manufacturers of MLCC, resistors and other products made by original factories such as Yageo and Huaxinke have withdrawn, and Japanese and Korean factories have focused more on the high-end vehicle market. However, the auto market continued to be sluggish, and the market also reported that the major Japanese and South Korean factories were re-producing Yageo’s current main products. At present, although Yageo’s price-raising cars are flying high, they can’t stand the competition for a long time, and the resumption of production by major Japanese and South Korean factories. Perhaps Yageo’s current bet is to let the car fly for a while.