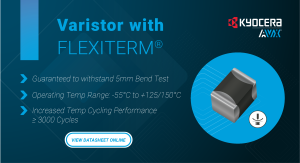 The VCAS Series MLVs with FLEXITERM technology can withstand severe flexing, vibration, and temperature cycling, enabling up to 5 mm of mechanical board flexure over 3,000 temperature cycles up to 150°C with zero board flex failures. This includes internal cracks and depanelization, and no significant changes to electrical characteristics, said Kyocera AVX.

These features make the VCAS MLVs with FLEXITERM suited for use in the signal and power lines of automotive, aerospace, and IoT applications that are subjected to hazards conditions such as significant temperature variations, vibration, wave soldering, forced cooling, improper handling, the insertion and removal of PCBs from connectors, and high-density board configurations, according to the company.

In comparison, automotive-qualified MLVs with industry-standard terminations typically support 2 mm of board flexure over 1,000 temperature cycles up to 125°C. Kyocera AVX said this is “insufficient for preventing flex failures cause by the mechanical and thermal stresses incurred during assembly and operation.”

The series also provides high current and energy handling capabilities, “super-fast” response times, multiple ESD strike capabilities, and bidirectional overvoltage protection. Other features include lower insertion loss and lower leakage current. “They also provide EMI/RFI attenuation in their off state, which can reduce or even eliminate the need for additional EMC capacitors,” said the company.

The VCAS Series MLVs are suited for automotive under-hood applications such as engine sensors with a direct connection to the battery rail, as well as in automotive audio circuits, aerospace, industrial, downhole drilling applications, and IoT applications including smart watches, other wearables, and cleaning robots. The devices are Rohs compliant and are qualified to both the AEC-Q200 and VW 80808 specifications.

Kyocera AVX also plans to offer all of its TransGuard and TransGuard automotive MLVs with the FLEXITERM technology.

The VCAS Series MLVs are packaged ON 7” reels for compatibility with automated processing equipment. Lead time is currently 10 weeks. The VCAS parts can be purchased at Digi-Key Electronics and Mouser Electronics.