In the automotive industry, LEDs are gaining ground thanks to their better illumination over traditional lighting technologies. LEDs can offer car drivers an extended range of vision, while enabling them to see the road more clearly, as well provide better lighting for pedestrians ON the road. A lot of the development focus is on smaller packaging, higher heat dissipation, greater power savings, and increased robustness.

The automotive LED market is expected to reach $2.9 billion in 2021, delivering a 13.7% year-over-year growth rate, thanks to headlights and display panels, according to TrendForce Corporation. The LED share for global passenger cars reached 53% in 2020, with an 85% stake in electric cars, according to the market researcher.

Part of delivering more aesthetically pleasing lighting for greater differentiation in both the car’s interior and exterior calls for smaller lighting and power solutions. Over the past year, while LED manufacturers have developed new devices in smaller packaging with higher brightness and reliability, LED driver makers continue to reach new levels of integration without compromising on performance to help develop sleeker automotive lighting designs.

At the same time, LED lighting manufacturers continue to advance their technologies to improve driving visibility and safety. For exterior lighting, those improvements focused on brightness, efficiency, and smaller package sizes.

One example is Dominant Opto Technologies’ next generation of LEDs launched earlier this year. The Spice Plus 2520 LEDs are designed for rear combination lamps, which are used as tail lamps, top lamps, center high-mounted stop lamps, turn signals, and rear fog lamps.

Despite its smaller size, measuring 2.5 × 2.5 × 0.7 mm, Dominant said it outperforms its predecessors and similar products in the market in terms of brightness, durability, and reliability. It also opens up opportunities for smaller and slimmer designs.

Dominant also noted that it is the first LED manufacturer to offer product families with a single footprint across five power levels (0.1 W, 0.2 W, 0.5 W, 1 W, and 2 W) and three colors — amber, yellow, and super red — to cover a range of rear combination lamp applications.

With a “One Package Fits All” concept, the company said circuit design is simplified and offers cost advantages.

Other key features include a low thermal resistance and excellent heat-dissipation properties. When compared with conventional packages like the PLCC, under the the same driving conditions, the Spice Plus 2520 is able to maintain a higher luminous flux for a longer duration.

Spice Plus 2520 also comes with a new lead frame and a special solder pad that has enhanced its package robustness with a 1.5× higher package shear strength over similar-sized LEDs with standard solder pads for greater reliability.

A big demand driver for ADB systems, said Samsung, is emerging automotive technologies, such as autonomous and connected driving, which have raised the bar for vehicle safety standards. 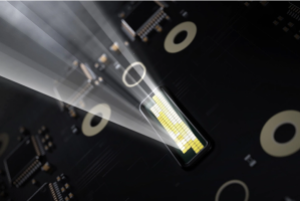 The PixCell LED can monolithically integrate more than 100 ultra-small segments into a single LED chip, while making the light-emitting area significantly smaller, at 15.4 × 2.7 mm. With the light-emitting area reduced to 1/16 of conventional discrete LED modules for ADB systems, the PixCell LED can reduce the headlamp size by 30% to 50% for sleeker designs, said Samsung.

The LED segments are separated by a silicon wall to prevent optical crosstalk, which offers superior contrast for much greater driver visibility, said the company, and each segment functions like a pixel to control light distribution so that the beam from the headlight illuminates only the exact location where it is needed.

Automotive lighting software is used to adjust the light distribution and brightness levels of the PixCell LED, making them easily adjustable to meet different global regulations and requirements for automotive lamps. A key benefit of the single standard headlamp is that designers can customize light output, depending on requirements, while speeding up the development and production cycle. 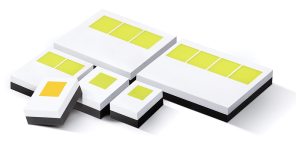 The C-series Gen3 family consists of six high-power LED packages that deliver high levels of luminous flux and luminance for greater power savings. The packages are available in a variety of colors and wattages, including five options for white (1 W, 3 W, 6 W, 9 W, and 12 W) and one for amber (3 W), which makes them suited for headlamp applications such as low and high beams, daytime running lamps, and turn-signal lights.

The C-series Gen3 requires fewer LED chips to achieve the same level of headlamp performance, compared with conventional high-power LEDs. Or with the same number of chips, it enables headlamps to lower the drive current by more than 10% and simplify the heat-dissipation solution by over 20%, resulting in more energy-efficient and lighter lamps.

Also aimed at EVs, Seoul Semiconductor Co., Ltd. has expanded its wafer-integrated-chip-on-PCB (WICOP) LED technology with the launch of the WICOP TE (Top Electrode) LED, which is designed to significantly improve the thermal efficiency of headlamps for vehicles.

Seoul Semiconductor’s WICOP TE for headlamps has deviated from the previous method of attaching the LED package to the PCB and can attach the package directly on the heat sink, which quickly dissipates the heat generated in the headlamp. The WICOP TE was introduced at the DVN workshop in the U.S. on Sept. 21.

Last year, Seoul expanded the family with the introduction of the WICOP ultra-high-luminance (UHL) series LEDs that are said to reduce headlamp power consumption by up to 20%, with a 40% improvement in heat dissipation compared with other LED products. 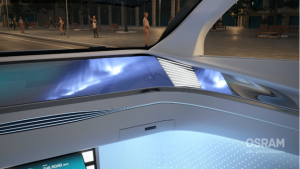 Thanks to the wide color temperature range from 2,700 to 6,500 Kelvin and the ability to choose from small bins, automotive designers can precisely define their desired white tone and make it a fixed design element across vehicles, said Osram.

For in-car displays, Maxim Integrated Products, Inc. has launched the four-channel, low-voltage MAX25512 automotive LED backlight driver with an integrated boost converter. The company claims it is the only integrated solution that retains full, constant brightness of in-car displays, even during extreme cold-crank conditions down to 3-V input Voltage.

Other advantages of the integrated LED backlight driver include a reduction in board space, lower bill-of-materials (BOM) cost, and high efficiency. The single-chip LED driver, offered in a 24-pin, 4 × 4 × 0.75-mm quad flat no-lead (QFN) package, eliminates an external mosfet and current-sense Resistor and integrates I2C communication, which all help to lower the BOM cost and reduce board space by 30%. In addition, the LED driver includes four 12-mA channels, claiming the industry’s highest efficiency (91%) at 2.2-MHz operation. 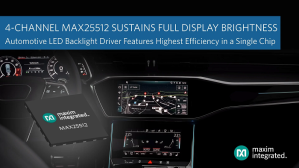 The MAX25512 integrates a boost converter and current-sense Resistor, which eliminates the need for an external MOSFET typically required to drive automotive displays. The integrated I2C communication interface is used to display settings and diagnostics, and an integrated hybrid dimming function reduces electromagnetic interference (EMI) and improves the dimming ratio. Although automotive start-stop systems increase fuel economy, they can challenge the power delivery system to maintain the same level of display brightness during restart, said Maxim Integrated.

The MAX25512’s 3-V input voltage and 91% efficiency at 2.2-MHz operation is said to deliver full, constant brightness of in-car displays during cold-crank/start-stop conditions. It operates down to 3 V after startup without the addition of a pre-boost converter, which protects the display from power disruptions. Diagnostic functions such as SHORT to GND on each current sink alerts the microcontroller and individual channel pulse-width–modulation (PWM) settings through the I2C interface to ensure a safer and higher-quality display, said the company.

Another highly integrated and flexible driver comes from STMicroelectronics. The ALED6000 single-chip automotive LED driver with an integrated DC/DC converter is designed to keep the lighting intensity consistent as electrical conditions within the vehicle fluctuate. The AEC-Q100–qualified LED driver can be used in exterior lighting such as daytime running lights, headlights, rear lights, stop lights, and turn signals, as well as interior lighting. 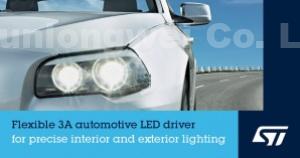 The integrated automotive LED driver drives a single string of LEDs at up to 3 A and offers a wide input-voltage range from 4.5 V to 61 V. The on-chip converter allows buck, buck/boost, and floating-boost topologies, which delivers the flexibility to power LED strings that require a voltage above or below the input voltage while also handling supply fluctuations, said the company. The converter also can operate in low-dropout mode with close to 100% duty cycle if the input voltage falls near or below the programmed output.

The ALED6000 implements digital dimming with a dedicated pin to apply the PWM control signal. There is also an enable pin and a sync pin that ensures low noise in multi-device applications. The output current is accurate within 3.2% and is monitored with a sense resistor that has a typical voltage drop of 250 mV. The quiescent current is low, at 2.4 mA in operation and 11 µA in shutdown. It also features a VBIAS auxiliary-input pin and pulse-skipping operation at light load. 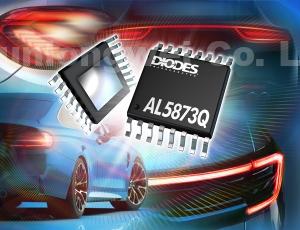 Each of the AL5873Q’s channels can drive up to 250 mA and is set via two reference resistors, which are connected to the driver IC’s REF1 and REF2 pins. Support for two different LED current levels enables more streamlined lighting systems, said the company, because the same LEDs can be used in rear lamp clusters for tail and brake lamps, lowering the BOM cost substantially.

The AL5873Q features analog and PWM dimming control functionality, supporting a maximum PWM frequency of 1 kHz. Diodes said that “the PWM dimming function is pivotal in improving current accuracy when LEDs are being driven at low current levels. The current on each channel is regulated to within a ±4% tolerance, which allows better channel-channel matching in the rear combination lamps.” The AL5873Q goes into standby mode if no PWM signal is detected to save power. The device also provides a wide input voltage range from 5 V to 55 V.

The LED driver offers built-in protection features with a bidirectional (input/output) fault pin, which flags any faults and allows up to four devices to have their fault pins connected. The device also includes an internal junction-temperature–monitoring circuit that reduces the LED current if its defined threshold temperature is exceeded. Other protection features include thermal shutdown, LED string-open/short-protection mechanisms, and input undervoltage lockout. 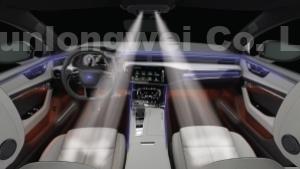 Car manufacturers are adopting animated lighting in the cabin to provide information such as driver-assistance prompts, vehicle status updates, or advanced comfort functions like adaptive roof light and are increasingly using RGB-LED lightbars to communicate with the driver through color-coded, color-changing, and blinking sequences, said Melexis. This results in challenges around maintaining consistent color across all of the LEDs in the lightbar and implementing simultaneous light changes, said the company.

By integrating the Melexis MeLiBu high-speed communication interface IP in the MLX8117, the MeLiBu controls individual LEDs to implement the lighting effects. It offers high resolution to mitigate temperature-related color drift and enables the real-time update of >250 RGB LEDs without delay. The MeLiBu communication interface uses a CAN-FD physical layer for performance at up to 2-Mbits/s speeds.

In addition to the MLX81117 LED drivers, the MeLiBu bus protocol is supported by Melexis’s multi-channel MLX81116 LED driver ICs, as well as the MLX81130 OLED driver. More compatible products will be released by the company.

The MLX81117 RGB-LED driver, housed in a 32-pin, QFN32 5 × 5 package, complies with ISO 26262 functional safety requirements up to Safety Integrity Level B (ASIL B) and delivers low EMI and high levels of immunity to help meet EMC regulations. Other features include brightness control across a wide dimming range, which allows adjustments for natural light levels.