ADI builds an intelligent bridge connecting the real and digital worlds with technologies such as detection, measurement, power, connection and interpretation. As a high-performance semiconductor company, ADI is not only committed to technological innovation and solving difficult engineering design challenges, but also continues to focus ON sustainable development and implements science and technology for good.

Highlights of ADI’s climate strategy include:

Achieve carbon neutrality by 2030 and net zero emissions by 2050

ADI has set goals to be carbon neutral by 2030 and net zero by 2050. Later this year, ADI will also release an implementation plan describing strategies and actions to achieve these goals. These actions include achieving 100% renewable energy use across the company’s operations by 2025 and addressing carbon emissions across the value chain (including Category 3 emissions) by 2030.

Yan Zheng said that the third type of emissions is currently the most complicated topic. ADI has hired a consulting firm EcoAct to help manage and improve carbon dioxide emissions. It is expected that specific green emission reduction targets and implementation plans will be proposed in August and September this year. . 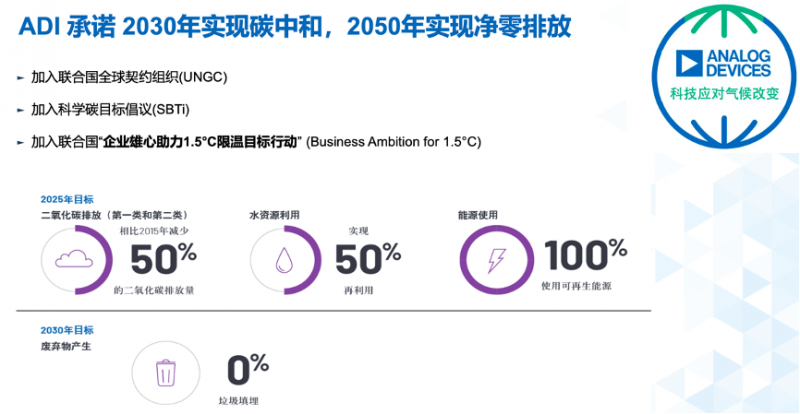 Yan Zheng explained with the “Paris Agreement” that its long-term goal is to control the increase in global average temperature within 2 degrees Celsius compared with the pre-industrial period, and strive to limit the temperature increase to within 1.5 degrees Celsius. If in the next decade, governments do not take stronger measures to deal with climate change, the final window will be missed.

Woods Hole Oceanographic Institution and ADI jointly announced the establishment of the Ocean and Climate Innovation Accelerator (OCIA). ADI has committed $3 million in funding to the alliance over three years to increase awareness of the critical role of the ocean in combating climate change and to continue to develop new solutions for ocean-climate interactions.

“Carbon emissions are at the heart of the global response to climate change,” said Vincent Roche, CEO of Analog Devices. “The ocean is one of our most important defense mechanisms against global warming—yet its ability to continue to play this vital role is being affected by Impacts of climate change. Through the Ocean and Climate Innovation Accelerator, we will invest ADI’s engineering and technical resources to improve our understanding of the oceans to better understand how they are affected by climate change and to develop solutions to Restoring the marine environment. We hope to have a meaningful and positive impact on the global response to climate change.”

It is understood that ADI invests more than 1 billion US dollars in research and development every year, and issued the industry’s first green bond in 2020, with a total amount of 400 million US dollars, helping to continuously invest in innovation to solve the world’s most difficult problems. Next, ADI will maximize the impact of its technologies and solutions on sustainable development.

With the increase of new energy applications such as wind energy and solar energy, as well as the increase of application scenarios such as electric vehicle charging stations and data centers, the energy storage market is growing rapidly. More accurate, highly integrated and stable BMS (Battery Management System) solutions The scheme is being favored by the market.

According to Wang Xingwei, Marketing and Application Manager of ADI’s China Product Division, the intermittent and random problems of clean energy such as solar energy and wind energy are attracting attention in the industry. For example, new energy will be frequently affected by seasonal and extreme climate changes. After the application, this feature will undoubtedly bring certain pressure to the safe operation and reliable supply of infrastructure such as the power grid. Therefore, the energy storage system is required to play the role of “shaving peaks and filling valleys” and increasing the proportion of renewable energy in energy. .

Energy storage systems in smart grids act like oil tanks or coal warehouses in the field of electrical energy, capturing and storing renewable energy sources such as wind and solar energy to keep modern grids stable for powering consumers, including electric vehicles (EV) charging, building/hospital and school power. Energy storage systems can not only support grids operating during peak hours, but also maintain existing grid infrastructure without the risk of grid overload and collapse. 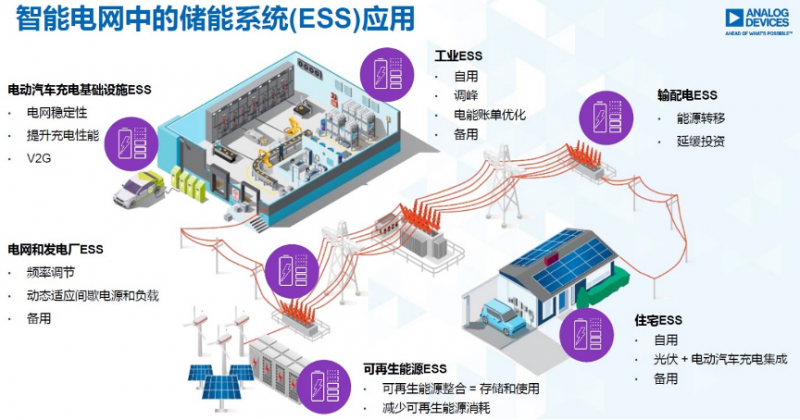 In terms of electric vehicle charging infrastructure construction, as the charging power of new energy vehicles increases year by year, the electric energy generated by renewable energy sources such as photovoltaic or wind energy requires corresponding high-voltage and high-power conversion systems when interacting with the power grid. ADI’s high-Voltage isolation driver chip can enable the energy storage system to meet the challenges of fast charging on grid power and energy in a short period of time, and can also interact with grid peak-shaving and valley-filling, so as to ensure that the impact of the grid is reduced to a safe level level. 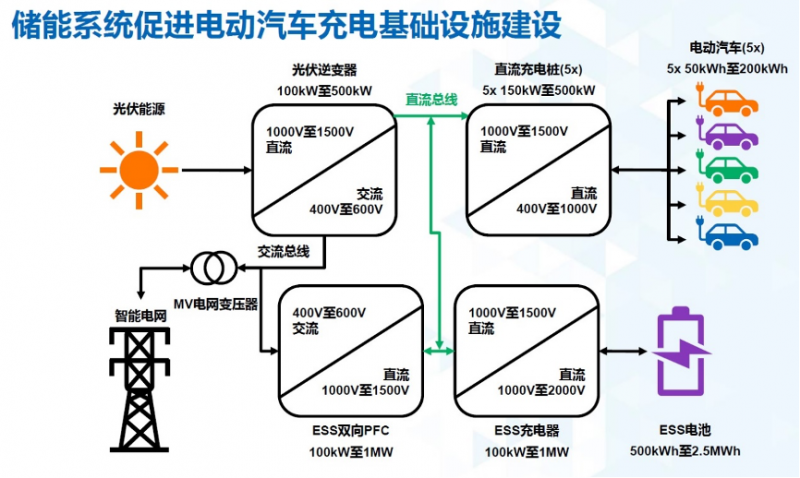 It is worth mentioning that the ADBMS1818, the first BMS chip developed by the China Product Division for energy storage systems, has been released and mass-produced in January 2021. This is an 18-channel 3mV precision BMS battery management chip, and A complete set of platforms for evaluating energy storage systems.

Wang Xingwei introduced that the BMS chip, as the “brain” of the entire battery system, in addition to its high-precision performance, can make the battery more usable, and to achieve a higher level of complete coverage is the consistent focus of ADI’s BMS products. Specifically, the BMS chip, as the brain, is constantly collecting key parameters of the battery, such as whether it is overheated, whether the rate of temperature change exceeds the limit, and whether the battery voltage drops rapidly. As the core component at the bottom of the sensing key signal, the BMS chip continuously diagnoses these dangerous signals through the corresponding diagnostic mechanism. Once a danger is found, it will make a rapid alarm processing, even before there is no actual battery burning signal. , providing a 5-minute thermal runaway early warning diagnosis function.