AMD held a Financial Analyst Day event earlier recently. At this event in China, AMD executives disclosed AMD’s detailed plans and roadmaps in various markets in the next two to three years, including Both CPU and GPU.

AMD launched the Ryzen 3000 series processors last year. With TSMC’s 7nm process and changes in the ZEN2 architecture, the Ryzen 3000 sharp processors have made great progress in both performance and energy consumption ratio, while maintaining the The higher cost performance challenges Intel’s monopoly position.

In terms of consumer CPUs, AMD shared its roadmap to 2021. AMD stated that the Ryzen 4000 series desktop processors of the ZEN3 architecture will be gradually launched by the end of 2020, and will be fully distributed in 2021.

In terms of data centers, AMD said that ZEN3, codenamed EPYC Milan, will use an improved 7nm process and will arrive ON time by the end of 2020 to compete with Intel’s 10nm Ice Lake-SP Xeon. 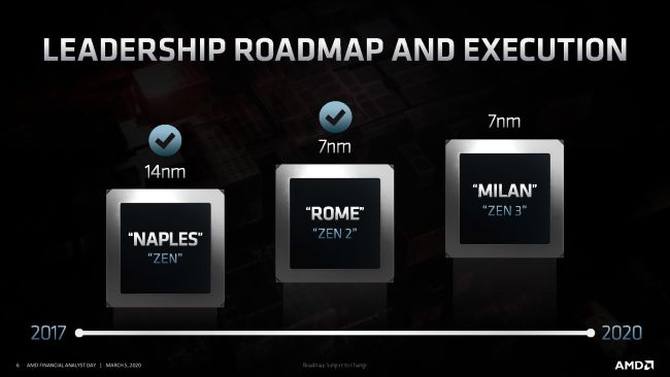 At the end of 2022, AMD will promote the launch of the 5nm ZEN4 code-named GENOA. If AMD can continue to execute the roadmap on time, it will be very competitive in the future market.