[Introduction]High-frequency (1MHz or higher) active low-pass filters have now emerged as a viable alternative to passive LC filters due to the advent of very high-bandwidth (100MHz or higher) integrated amplifiers . Analog signal filtering applications with bandwidths in the megahertz range can be implemented with a discrete active filter circuit using resistors, Capacitors and a 400MHz op amp such as the LT1819 or a fully integrated low pass filter such as the LT6600-10 . .

High-frequency (1MHz or higher) active low-pass filters have now become a viable alternative to passive LC filters due to the advent of very high bandwidth (100MHz or higher) integrated amplifiers. Analog signal filtering applications with bandwidths in the megahertz range can be implemented with a discrete active filter circuit using resistors, capacitors and a 400MHz op amp such as the LT1819 or a fully integrated low pass filter such as the LT6600-10 . The LT6600-10 has a 10MHz fixed frequency response equivalent to a fourth-order flat passband Chebyshev function. An active RC low-pass filter based ON the LT1819 can be designed with Chebyshev, Butterworth, Bessel, or a specific frequency response (up to 20MHz).

The LT6600-10 is a fully integrated differential fourth-order low-pass filter in a surface-mount SO-8 package (Figure 1). Two external resistors ranging from 1600Ω to 100Ω set the differential gain in the filter passband from -12dB to 12dB, respectively. The LT6600-10 has a maximum passband gain ripple of 0.7dB to -0.3dB at frequencies up to 10MHz, with typical attenuation at 30MHz and 50MHz of 28dB and 44dB, respectively. When using a 2VP-P signal with a passband gain of 1, the signal-to-noise ratio (SNR) at the output of the filter is 82dB (a signal-to-noise ratio specification suitable for resolutions up to 14 bits). In addition to low-pass filtering, the LT6600-10 can also shift the level of the input common-mode signal. For example, when using a single 3V supply, if the input common-mode voltage is 0.25V, the output common-mode Voltage can be programmed to 1.5V. The LT6600-10 can operate from a single 3V, single 5V or dual 5V power supply.

An RC low pass filter based on LT1819

The LT6600-10 greatly simplifies low-pass filter design because it requires only two external resistors to set the differential gain, but the passband is fixed. For more flexibility, the LT1819’s 400MHz, high slew rate, low noise and low distortion dual op amps are a good choice. Figure 2 shows a differential 10MHz fourth-order low-pass filter using two LT1819s. This approach provides tunable passbands up to 20MHz, but at the cost of a larger number of passive and active components and is very sensitive to changes in component parameter values. For example, the component sensitivity analysis shown in Figure 2 states that in order to maintain a similar passband ripple (±0.5dB at frequencies up to 10MHz) as the LT6600-10, the component tolerance of the resistors must not exceed ±0.5% , the component tolerance of the Capacitor must not exceed 1%. Also, the gain-bandwidth product of the LT1819 should not be lower than 300MHz. If a Butterworth, Belsey, or specific frequency response is desired, a ±1% Resistor and ±0.5% capacitor are sufficient. These filters are less sensitive than “flat” passband Chebyshev filters. This LT1819-based filter can operate from a single 5V or dual 5V supply (when using a single 3V supply, the filter circuit uses an LT1807, which is a 325MHz rail-to-rail dual op amp). 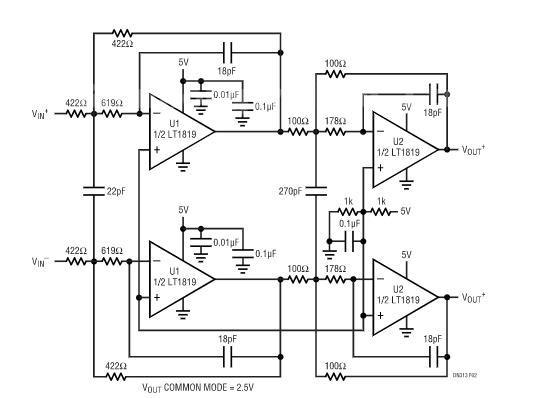 Figure 2: Another 10MHz single-supply low-pass filter similar to the filter shown in Figure 1.This circuit uses the LT1819 op amp with adjustable bandwidth up to 20MHz

An LT6600-10 or a 10MHz low-pass filter based on the LT1819 provides sufficient stopband attenuation to reduce aliasing at the input of a high-speed analog-to-digital converter such as the LTC1744, which is a 50Msps differential input ADC. Figure 3 shows the LT6600-10 and LT1819-based 10MHz filter gain response curves. The LT1819 filter is designed to have higher attenuation than the LT6600-10 filter at 20MHz to obtain sufficient stopband attenuation. The LT1819 circuit’s stopband attenuation above 40MHz is limited to -42dB at very high frequencies by the stray paths of the printed circuit and differential component mismatch with reduced common-mode rejection. The stopband attenuation of the fully integrated LT6600-10 filter continues to increase above 40MHz. Figure 4 shows the resulting DC to 10MHz curve for a 1MHz 2VP-P differential sine wave processed by an LT6600-10 and an LT1744 14-bit ADC. The curve in the figure is an averaged 4096-point FFT of a 1MHz sine wave digitized at a 50Msps sample rate. The 1MHz harmonic distortion in Figure 4 is actually the same as using an LT1819-based filter and an LT1744 at the same time. In a 10MHz bandwidth, the measured SNR plus distortion using the LT6600-10 and LT1744 circuits is 74.5dB, which is essentially the same as the dynamic range of an LT1744 ADC (minimum 75.5dB for a 2VP-P signal). )equal. The filter based on the LT1819 is slightly noisy, and the sum of the measured signal-to-noise ratio and distortion using the LT1819 plus the LT1744 circuit is 71.5dB. 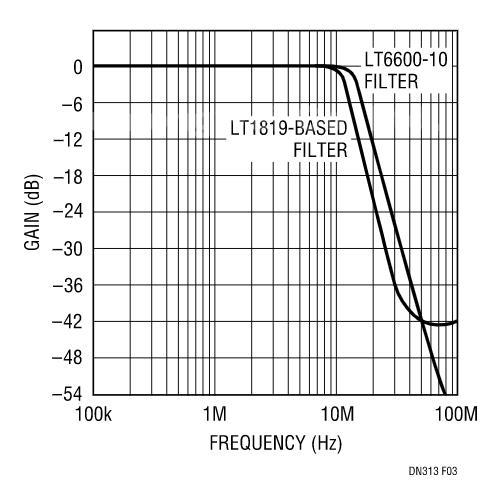 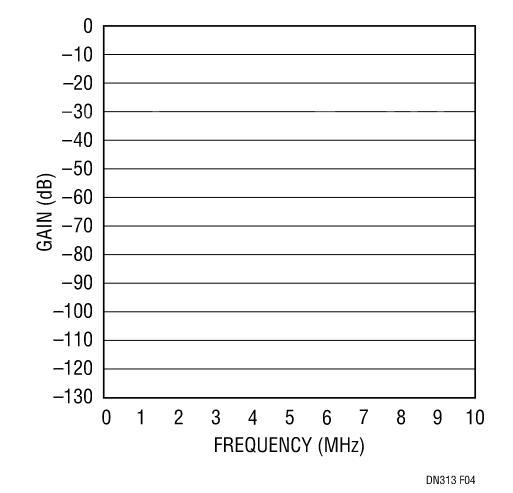